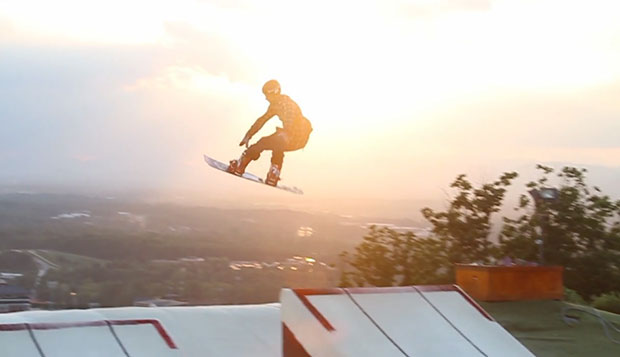 When he wasn't working on the summer crew for Liberty Mountain Snowflex Centre (LMSC), rising senior Liberty University snowboarder Isaac Gibson spent some of his spare time at the year-round on-campus facility filming action on the slopes. He put together a series of video clips of fellow LMSC employee Jason Anderson showcasing the LMSC facility by landing some of his most extreme tricks on its ramps and rail features.

Anderson then edited and posted the completed production on Vimeo and it was picked up by a major global snowboarding magazine's website. The high-definition video received more than 60,000 hits and 4,500 likes in the first week.

The video demonstrates the level of creativity riders can use on the Snowflex slopes, from performing aerials off jumps and tricks on above-ground plastic pipes and metal rails to taking a shortcut over a gravel patch.

Anderson, who helped with the first two of three ski and snowboard camps at Snowflex this summer before leaving for Colorado last week, works at Seven Springs Ski Resort during the winter season.