Simon, Halpenny stand out in a crowd at Chowder Cup 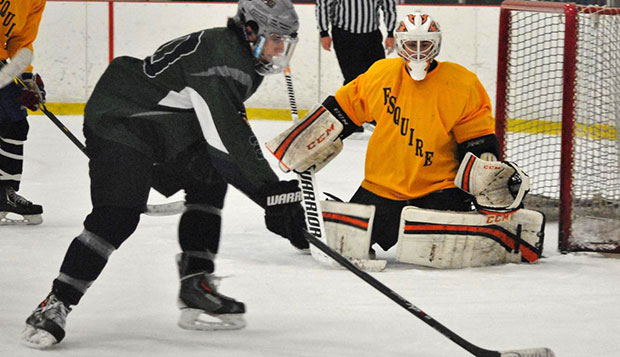 Luke Simon, a forward from Lafayette, La., maneuvers the puck near the net. He had three goals and five assists in four games.

Two incoming Liberty University ACHA Division I men's hockey players showcased their skills at this past weekend's Chowder Cup, a prestigious tournament featuring 60 junior elite and 60 collegiate division teams at the Foxboro Sports Center and three other rinks near Boston.

Both Luke Simon, a forward from Lafayette, La., and Josh Halpenny, a goalie from British Columbia, Canada, played on the same Fellowship of Christian Athletes junior elite "green" team. They were impressive in leading the squad to a 3-0 record in pool play before losing their playoff opener to a team that included several USA Hockey's National Team Development Program (NTDP) players and at least on NHL draft pick.

"It was awesome," Simon said. "We had a really good team. I thought we were going to win the whole Chowder Cup. Everybody enjoyed it and gained confidence. I got better on the ice and as a person."

Before skating seven times in four days, including three practices Thursday in Rhode Island, the team had morning devotions and got to hear from former Ottawa Senators and Washington Capitals player Brian Pothier.

Simon and Halpenny formed a quick friendship, hanging out quite a bit at the tournament in preparation for their arrival at Liberty — on Wednesday for Simon, who will attend Friday's final Summer Orientation, and Aug. 12 for Halpenny.

Flames assistant coach Jake Hannon, who played in the Chowder Cup the year before he started his collegiate career at Liberty in 2007, returned to Boston and had the opportunity to watch both future Flames in action. This spring, he recruited Simon to Liberty during an FCA camp held in his hometown of Buffalo, N.Y.

"Josh and Luke looked great," said Hannon, who drove back to Lynchburg in time to help Liberty conduct its second week of overnight hockey camps at the LaHaye Ice Center. "It was exciting to see how well they did despite the fact they were facing some of the top players in the country. They were battling."

Simon, who started on the first line, was one of the top scorers on his team, netting three goals and distributing five assists for an average of two points in the four games.

"Luke had a great weekend," Hannon said of Simon, who had a goal and an assist in the 6-3 playoff loss.

"He's a great guy, a very skilled, very fast skater," added Halpenny. "He would just drive wide, go right past the defensemen, and go on a breakaway. It was quite impressive."

Halpenny, meanwhile, played 25 minutes in goal in each of the three pool play games, which FCA's elite team won by an average margin of 8-1. He then started and played the entire 30-minute playoff game, making at least three saves of one-on-one breakaway opportunities by left winger Sonny Milano, a first-round NHL draft pick of the Columbus Blue Jackets.

"(Milano) had a few breakaways, but Josh stood right up and he did awesome," Hannon said. "He's very fast in the net. He does a great job of controlling his rebounds and playing well with his defensemen. A lot of times, if there was a flurry or a scramble in front of the net, he did such a great job of putting his rebounds in safe areas. If they made a mistake, he'd always be there to back them up."

"Josh played the whole playoff game and he played good," Simon added. "We had some defensive breakdowns and they capitalized."

"Obviously, it was disappointing to lose in the first round of the playoffs, but at the same time, they were a great team and played well," he said. "We still developed, both on the ice and spiritually, so it was good. It was a lot of fun. It definitely got me in better shape for next season. I'm very excited about it."