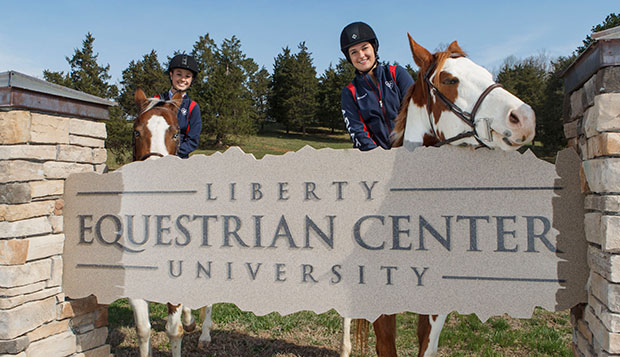 The second-year equestrian program will have a second barn, as well as a second competitive women's riding team, this fall.

In just weeks, Liberty University will welcome thousands of new students to campus, many of whom are looking to participate in its thriving Club Sports programs. While summer has flown by, the Club Sports department has used the time constructively in preparation for the arrival of those newcomers, updating and improving existing facilities and building onto others.

When campus is filled to the brim in mid-August, it will be ready to meet the demands of more than 500 eager competitors in 32 sports, with state-of-the-art facilities and skilled coaches.

Liberty's Equestrian Center, located between the Liberty Mountain Snowflex Centre (LMSC) and Camp Hydaway, previously had one eight-stall barn for both school- and student-boarded horses. Over the summer, workers constructed a new 18-stall barn, which will house horses belonging to boarders only. The new structure's tack room, feed room, grooming and wash stalls, coaches' office, and meeting room will benefit all involved in the equestrian program, especially members of its riding team.

"We can keep the original barn just for team activities, so that everything is separate," said Caroline Trexler, Head Coach of the Lady Flames' equestrian program. "That'll be really nice and helpful, especially since we're adding a second equestrian team this year. Having our own facility to accommodate those teams and students and all their rides will be even more important."

Liberty also added a second riding area outside of the original ring to the equestrian center's grounds, allowing for more students to practice without scheduling conflicts.

Meanwhile, the gymnastics team took the summer to revamp its training facility located in The Plaza in Lynchburg, repainting, addressing minor repairs and adding new equipment.

Additionally, the building is now dedicated solely to team use. This will allow Liberty gymnastics athletes more time and attention to hone their skills and take advantage of the facility updates — a major boost for both program recruiting and retention purposes.

Skiers and snowboarders alike start out learning new feats on the on-site aerial awareness trampoline, testing their limits without risk of major injury. Now they will have the opportunity to further experiment on a larger scale, but still with landing security.

"You can try any level of maneuver that you want to do — the same kind of thing you see in the X Games and the Olympics, even," Washburn said. "All sorts of variations of spins and flips could be attempted on the airbag, and you can just land on it. It's very soft, very forgiving, and once you get comfortable landing a trick on the airbag, you can learn it on our actual jump. It's a really cool process… and it should translate easily to a snow jump."

The hockey program added a puck-shooting machine for goalies to use as well as countdown clocks to be displayed inside its team locker rooms. In addition, eight movable bleachers were set up around the rink, with new grip tape placed on the existing bleachers, and the sheet of plexiglass was replaced along the boards.Under the ice, a fresh coat of paint displaying Liberty's logo was skillfully brushed. Finally, in the foyer area, new carpet was installed and powder-coated stanchions added to direct spectators.