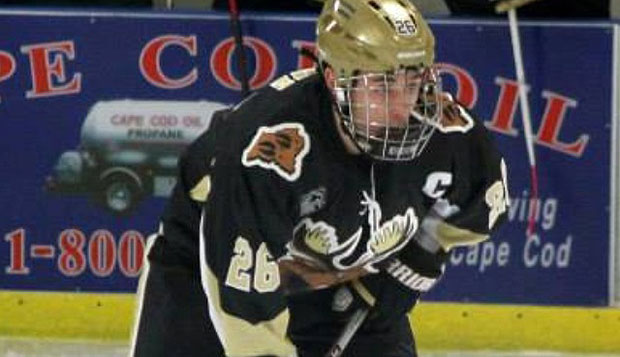 With last week's commitment from forward Colt Steele, the leading scorer for the Maine Moose out of the Northern States Junior Hockey League, the Flames have now landed five forwards, two defensemen, and one goalie. Three of the recruits are from Canada with the other five born and raised in the United States.

Steele, who scored 35 goals and distributed 45 assists for the Moose last season, is another building block on an already firm foundation, strengthening the squad's depth at the forward position.

"Colt is a great addition for our program," Liberty Head Coach Kirk Handy said. "He is a hardworking player who will be able to use in many different situations. We want to bring in guys who can really push our group of forwards. Colt is definitely one of those players."

Steele visited Liberty's campus for the first time at College For A Weekend (CFAW) in April, which coincided with the Flames' Hockey Recruitment Camp. He was blown away by Liberty's facilities and what the program has to offer and he in turn made a positive first impression on the Flames' coaching staff.

"When I came to CFAW, it was clear that God led me there," Steele said. "I just loved the campus and how the hockey program was run. Everybody was unbelievable and the school is beautiful. I felt real comfortable with all of the coaches."

"We had heard great things about his character … and we invited him to come to our recruitment camp and we were pleasantly surprised," Boettger said, noting his diminutive size — he's 5-feet, 7-inches tall and weighs 175 pounds — was not a drawback. "He's a smaller player, but he's very, very positionally sound. He can play with pretty much anybody and he has a knack for finding the net."

He is eager to put his faith in action upon arrival at Liberty for its preseason training in early August in preparation for the Sept. 5th season-opening series against the Potomac Patriots junior program at the LaHaye Ice Center.

"Seeing that God is so central to what is going on there, all the praise and glory goes to Him no matter what happens," Steele said. "I like that part of it and I'm just going to do my best to serve God. I want to come in and help the team any way I can."

Steele, who has excellent speed, offensive skills, and vision to see plays unfold, realizes he will have to battle for his ice time from the first day of preseason practice to contend for playing time on one of the top two lines.

"I hope to complement them and fit in where I can," Steele said. "I'm excited to learn from those types of players and take one of their spots when they leave, hopefully."

Steele, who spent a year playing hockey at a prep school after graduating from high school and a year at the University of Southern Maine, plans to study in Liberty's Pre-Med or Health Sciences program. He has ambitious career goals off the ice.

"I'd like to get into the College of Osteopathic Medicine, which is another reason that led me to Liberty," Steele said. "I'd like to become a sports medicine doctor. (Pre-Med studies) will be tough to balance (with hockey), but I think I can do it. I'm excited for the challenge. With Him, I can do anything."