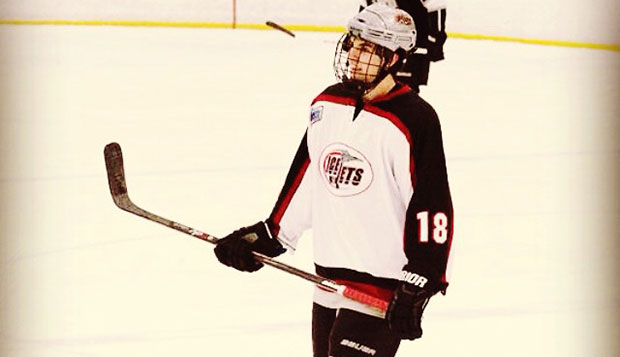 Hannon, who was selected as FCA Hockey's July Coach of the Month, helped coach Luke Simon, FCA's July Athlete of the Month, at an FCA camp in Hannon's hometown of Buffalo, N.Y., earlier this summer.

On Friday, Simon, a forward on the Dallas Ice Jets' junior elite team in the Western States League this past season, committed to play forward for the Flames starting this fall.

"It's fantastic," Handy said. "It's neat to see how God's hand is on this whole recruiting process, with guys like Luke Simon committing to us."

Simon took the less-traveled road to Lynchburg, where he will join a team on which Canadian-born players easily outnumber those from the United States. He grew up in Lafayette, La., which currently has the only ice rink in the state of Louisiana. At the age of 15, he moved to Dallas to play hockey three hours a day, five days per week for the next three years, while taking online classes through National High School.

"I told him I was a born-again Christian and we really hit it off," Simon said. "He's really the reason I was able to go to that camp in Buffalo."

Simon, who only became a believer a year and a half ago, wasn't aware a program such as Liberty's existed until he heard about it through Hannon. Though he has yet to set foot on campus, he is thrilled to have the opportunity to continue his hockey career and grow in his spiritual walk.

Simon, who leaves the junior circuit two years earlier than most and plans to study business, may need some time to adjust to life in the ACHA.

"He's a really talented hockey player who's going to have to learn how to play the college game now," Handy said. "He plays the game the way we want it played, combining the physical game as well as the finesse game."

Simon can play at any of the three forward positions, showcasing his versatility to complement his speed and playmaking ability.

"I'm excited about this opportunity because I do think I could make an impact right away," he said. "It's definitely going to be a test. I'm going to go and prove myself against an older group of guys. Playing with better players only makes you better."

Handy said players such as Simon represent the future of Liberty Hockey.

"I love his tenacity and how he is so excited to come to Liberty," he said. "It will be fun to feed off his energy."

He will join incoming Flames goalkeeper Josh Halpenny, another player with FCA ties, and complement Grant Garvin, who played at Holy Cross as a freshman last season, on Liberty's front line. Randazzo referred Garvin, a fellow Buffalo native, to Liberty.

"We are appreciative and blessed by our relationship with Rick," Hannon said of Randazzo, who he met during his freshman season at Army before transferring to Liberty. "He knows the Christian guys, the right guys that we're looking for."

Hannon and Simon will connect again this week in Rhode Island and Boston, site of Saturday's and Sunday's Chowder Cup junior and college-level tournament. Simon will play on the same team as Halpenny, on one of three FCA squads Randazzo has assembled for the event.