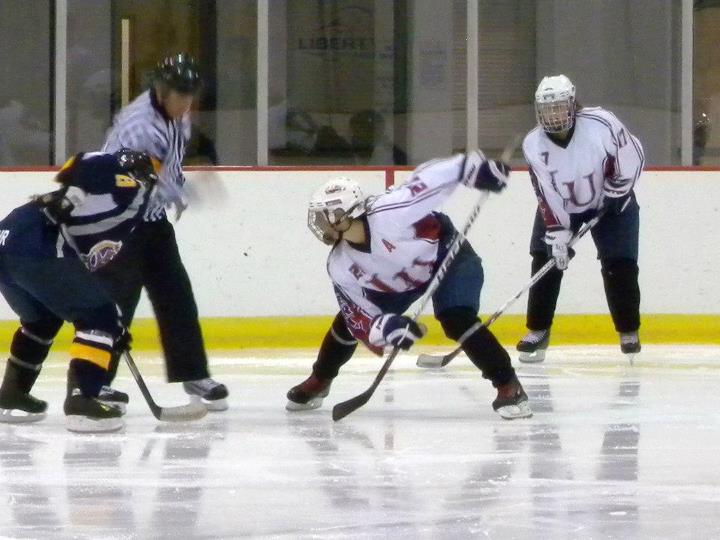 The Lady Flames hockey team started off the month of February with a string of challenging home games at the LaHaye Ice Center against the University of Minnesota and Northeastern University.

Thursday night's game against Minnesota resulted in a 2-1 loss for Liberty. The Lady Flames faced the Lady Gophers again on Friday night, losing in another close match, 3-2. In a change of competition on Saturday, the Lady Flames played Northeastern University in another testing match. Liberty lost 4-2.

The first game of the weekend proved to be a challenge for the Lady Flames. Less than three minutes into the game, a scrum broke out in front of Liberty's goal, with players sprawled on the ice or on each other. Liberty desperately tried to clear the puck away from junior goalie Tierney Murphy, while Minnesota attempted to score.

Limbs blurred with sticks, but Liberty prevailed and cleared the puck away from its goal.
"It was disappointing to walk away without the win, but our team put up a good fight," junior forward Stacey Christiaans said. "We played aggressively and played well in the offensive zone, unfortunately we came up against sharp goal tending."

Liberty's offense dominated the first two periods of Thursday night's game, but Minnesota's goalie proved to be a tough opponent. The Lady Flames took shot after shot but could not capitalize on their opportunities.

Just over two minutes into the third period, Minnesota scored the first point of the game.
Tension spiked and sticks were flying, literally, as Liberty tried to tie the game.

"The best part of the games we have played so far this weekend is the level of competition we faced," senior defender and captain Brooke Harris said. "Minnesota is a fast-paced team that plays physical. It is nice for us to play against teams with similar abilities."

With eight minutes left in Thursday's game, the Lady Flames scored, but Minnesota answered shortly afterward, finalizing the score of the game. Liberty did not give up. With one minute remaining in the game, head coach Paul Bloomfield pulled the goalie in favor of an extra attacker for a final effort to score.

"Although we lost a tough game on Thursday, our goalie Tierney Murphy stood on her head," Harris said. "We also used the ice well, passing through the neutral zone and creating opportunities that unfortunately we were unable to capitalize on."

Though the weekend's opponents were talented, Liberty held its own and teammates were proud of Murphy's performance.

"As a goaltender, I can't ever lose focus," Murphy said. "Being a goalie to me is a game within the game. Everything I do is unique from what the players do. The players have 45 second shifts, I am on the ice the entire game. I love it though."

Feb. 11 and 12 are the final home games of the season for the Lady Flames hockey team. They will be facing Penn State University. It will also be senior night for the team.