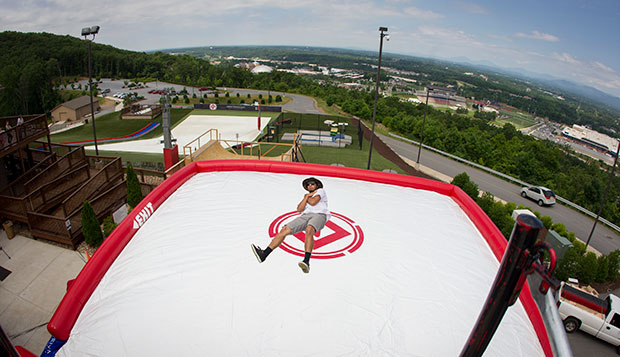 Liberty senior Kevin Hoff prepares to land a free-fall test jump on the new airbag at Liberty Mountain Snowflex Centre when it was showcased for the media on Friday.

When Liberty University's men's snowboard team placed fourth in slopestyle at the 2013 United States Collegiate Ski & Snowboard Association (USCSA) National Championships in Sun Valley, Idaho, then Head Coach Will Scheren said the Flames — who have used Liberty Mountain Snowflex Centre (LMSC) as their year-round training base since it opened in 2009 — had all the tools they needed to win a national title, except an airbag.

Now the team, coached by Ryan Leeds and coming off a second-place showing in the men's snowboard Rail Jam and fourth-place finishes in the men's and women's slopestyle events at the 2014 USCSA Nationals in Lake Placid, N.Y., will have a $35,000 Bagjump airbag available for training as it enters its sixth season as a Club Sports program.

The Flames will be able to push the edge in their training for Big Air freestyle jump stunts with the use of the 50-foot by 50-foot inflatable pad that is up to 11 feet deep.

LMSC recently showcased the specially engineered airbag for local media and will introduce it at summer camps in July before team members have access to it upon their return to Liberty in August. President Jerry Falwell was one of the first to test it out when it arrived in May. (See the video of President Falwell's jump.)

Drew Sherwood, general manager of LMSC, said the airbag, which complements the aerial awareness trampoline already on site, will allow people to practice a new trick before they try to land it on the forgiving but not injury-proof Snowflex slopes.

"It's all about advancing the athletes and advancing them safely," he said. "There's a lot of accidents within the ski and snowboard industry and they're constantly looking at avenues of preventing them. With the airbag, it will allow them to land in an awkward position and they can walk away safely. We can videotape it and show them what they're doing wrong and they can practice and practice and practice before they go attempt it on a jump. Then they can try landing it on the slope and move to a higher level."

He expects it to be another recruiting tool to attract some of the top skiers and snowboarders from across the country to compete for Liberty.

"We can't scholarship our Club Sports athletes, so this is another advantage for us to say, ‘If you're that good, come here and train. This will get you to that next step,'" Sherwood said.

More than a dozen members of the U.S. Ski and Snowboard Team trained with an airbag prior to the 2014 Winter Olympics in Sochi, Russia.

"Everybody from the first-time Olympian to Shaun White is using airbags for progression, for safety," Sherwood said. "We're keeping up with the industry which is good for our facility and good for our team."

While it was purchased specifically for the ski and snowboard team, the airbag will be available to a wide array of potential users, including members of Liberty's gymnastics and swimming and diving teams.

"Our first priority is to train our collegiate team, to equip them to go to nationals again," Sherwood said. "Second, it is for use by our students, third for our (Next Level) summer campers, and fourth for professional athletes to come in and train on."

Snowflex will set up the airbag below the Rail Jam features at the base of the slope ­— and build a jump in front of it to serve as a launching pad for aerial stunts — in time for about 250 campers to use at its annual ski and snowboarding day camps from June 23-27 and its overnight Next Level Summer Camps July 13-18 and July 20-25.

Funds from the camps, which are staffed by 15 to 20 coaches and counselors, including several members of Liberty's ski and snowboard team, support the Club Sports program.

LMSC continues to be a popular destination during the summer months. Sherwood said people travel from as far as California, Canada, Maine and Florida to test out the slopes.

"Snowflex is the most unique place in North America," he said. "There's nothing like it. Everything else has duplicates. This is the only one. No matter if it's snowing, if it's raining, or if it's 100 degrees outside. We're open, we're skiing, we're snowboarding, we're tubing, and we're having fun."

In an effort to beat the heat, the facility has introduced new summer hours this year — from 4 p.m. to midnight Monday through Friday, noon to midnight on Saturday, and 2 to 10 p.m. on Sunday. Ski and snowboard lessons for ages 2 and up will be available during those hours.

LMSC holds a series of Family Days throughout the year to introduce the local community to winter sports. A Family Luau is set for 10 a.m. to 5 p.m. this Saturday, June 14. Admission is free, though guests are asked to bring donations of back-to-school supplies, such as new or gently-used backpacks and lunchboxes, for Lynchburg-area students in need. Food will be available for purchase. Besides sampling the slopes on skis or snowboards, visitors can also try out the two NevePlast tubing runs, which opened in October.