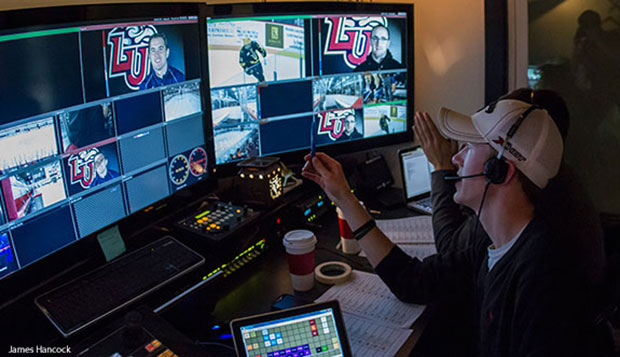 The show, "Saturday Night Hockey," was produced primarily by broadcast and digital media majors from Liberty's School of Communication & Creative Arts under supervision from LFSN streaming producer Matthew Byrd. It was rebroadcast to more than 85 million homes across the United States as LFSN's "Game of the Week."

The awards, hosted by ESPN's Rece Davis, were a highlight of the Sports Video Group's (SVG) College Sports Summit. This year, there were a record number of more than 300 entries in categories for national, regional, and local professional broadcasts as well as collegiate athletics and collegiate student productions.

"This is judged by those who work in the industry, ESPN, Fox Sports," Byrd said. "All the entries have to involve a college sports broadcast."

All of the winning entries are available for viewing online.

Three other student-produced broadcasts for LFSN received honorable mention from SVG and the National Association of Collegiate Directors of Athletics, including an ACHA preseason show, aired live from LaHaye on Sept. 17, and the teaser for the three-hour ASU game coverage.

Liberty students were also honored for a special feature on Liberty Head Strength and Conditioning Coordinator Bill Gillespie, which was produced last summer and rebroadcast throughout the year during breaks in LFSN's live coverage.

"Last year, we submitted our very first ACHA selection show and received an honorable mention for that," Byrd said.

"This year, we submitted an entry in each of the four categories," he added, referring to Live Game and Event Production; Program Series; Special Feature; and Promotion, PSA, Tease, or Marketing Campaign. "It was great to have three awarded honorable mention and one nominated for the (Outstanding) award."