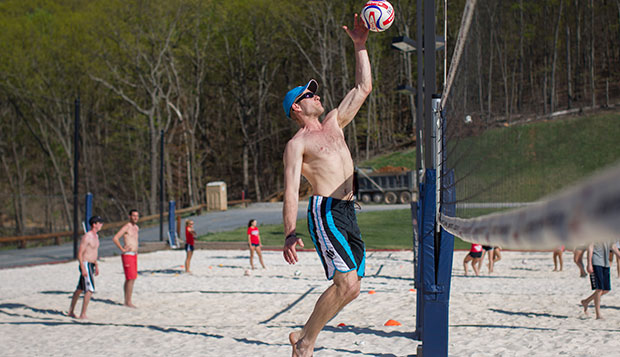 Liberty graduate student Ryan Culkin, who teamed up with David Hong to win the men's bracket, goes up for a dink at the net.

Duos from Liberty University's beach volleyball team placed first in the men's division and second in the women's bracket of its second home tournament of the season on Saturday at its four beach courts beyond the intramural fields.

A Virginia Beach pair, Kayla Cason and Rachel Frankenberger, emerged as champions of the women's tournament. The Lady Flames' tandems of Morgan Horne and Jules Johnson and Dana Mercer and Alysha Clayton came in second and third, respectively, while an independent team of Liberty students took fourth.

While the turnout was lower than initially expected, Liberty Head Coach Rachel Willis and her athletes were pleased with the competitive experience the tournament presented the team.

"It was not the turnout we wanted," senior Ryan Culkin admitted, "but it's good to get a win in a tournament like that, because when you play against the same guys you practice with every day, it's tough. They know your go-to shots and your secret weapons, so you can't use those. You have to pull new tools out of the box and try that to pull out a win."

Willis agreed, citing the creativity and smarts necessary to succeed in the tournament as key factors in preparing for future competitions.

"Even just seeing them come out and play each other, like our guys are, is a lot of fun and good experience," Willis said. "The nice thing about beach is it's never just one thing you're doing wrong. There's always a bunch of things that you can do to play better. I'm seeing (the Flames) do that — make adjustments when they're playing each other, make smarter decisions. It's always good to see them do that."

Beyond the immediate results, though, the tournament is another sign of the rapid growth of a program that two years ago didn't even exist. Since its 2012 inception, Liberty's beach team has developed its own club and promoted local participation and engagement in the sport to become a key fixture in the rise of the East Coast beach volleyball scene.

"It's exciting," Willis said. "We're one of the only schools on the East Coast that even have these facilities for a club beach program, so I think we're very unique in that aspect. As we travel more and get our name out, I think we're going to start to get more attention. It's really exciting to have these facilities and the opportunity to do this."

Those facilities have proven to be a major upgrade in the program's success, allowing Liberty to host the two tournaments in May as well as regular weeknight competitions — something Willis initiated after coming on as head coach.

"It's a fundraiser for us, but it's also an opportunity where most of our teams have the chance to play in it and we draw competition from the local area," Willis said, "so I think it's really nice for the community, a way for us to interact and hopefully get some more experience. I think it helps."

Culkin, who plays an active role in the program, agreed with his coach, citing the weeknight leagues as great experience for Liberty's teams and, more importantly, a boost for local beach volleyball interest.

"Beach volleyball on the East Coast is getting bigger," Culkin said. "It has so much potential (here) with Virginia Beach being so close. We're really trying to promote it out here. Obviously, our team has way more support and resources from the school than any other club team (in the region), so it's been great having that, and I look forward to the future. I think in this program is going to get huge within the next five years."

Liberty will travel to Virginia Beach for doubles tournaments June 7-8 and July 12-13 in preparation for the July 24 National Collegiate Sand Volleyball Association (NCSVA) Collegiate Championships in Long Beach, Calif., where it plans to send its top men's and women's pairs.