Liberty sends all three of its foursomes to ACRA finals 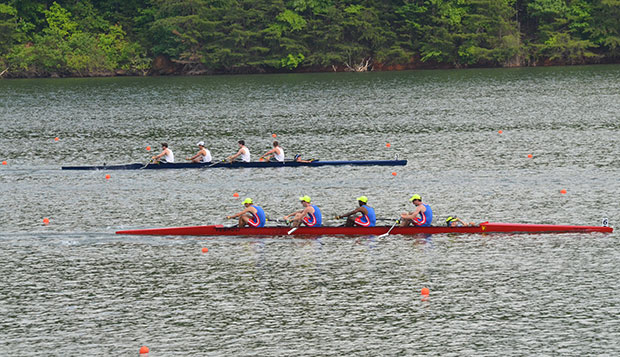 The event, which served as the national championships for schools that don't offer crew as an NCAA sport, attracted 272 entries from 65 club teams as far away as UCLA and Washington State University.

The Flames' Men's Varsity Lightweight 4, paced by two- and three-seat seniors Mitchell Dieudonne and Robert Newman, took 12th overall and fourth out of eight boats in the Petite Final in a season-best time of 7 minutes, 1.6 seconds. Only seven seconds separated the first- through fifth-place finishers in the 2,000-meter race.

"Theirs was a nail-biting finish," Liberty first-year Head Coach Sarah Morris said. "Every boat was neck-and-neck the whole way down the course, and they said it was the best race they've ever had. To fight the whole way through was really exciting for them. They did really well."

Their finals time was a record for a Flames varsity men's foursome on the Lake Lanier course, site of the 1996 Summer Olympic rowing events.

The tandem, which also featured coxswain Ron Beimel, sophomore captain and stroke seat Joel Buckhalt, and sophomore one-seat rower Sam Knauss, placed seventh in 7:07.3 in the first heat of Saturday's preliminaries. It then finished runner-up to Washington State in the second repechage, or consolation race, to determine lane assignments for Sunday's final.

"That was an incredible race, the best they've ever done," Morris said on Saturday. "They had a good sprint at the end, passing Oregon University in the final 200 meters, and they were strong all the way through."

Liberty's Novice Men's Four, made up predominantly of freshmen, came in 18th out of 28 boats overall and second out of six teams in the C Final in 7:18.2.

"Sunday's row was a lot closer and they really had to fight for it, which was really good," Morris said. "It was down to the wire all day in most of the finals and they held their position pretty well. It was good to see."

Liberty's Novice Women's 4 wound up in last place out of 15 boats in its field, but gained momentum from heat to heat and improved their times at the regatta.

"This was the first time we felt we could take a novice women's boat to nationals and the girls did a really good job of closing the gap between Saturday's first heat to Sunday's finals," Morris said, noting the Lady Flames finished within 30 seconds of the winner of their seven-boat Petite Final in 8:37.4.

Sophomore Rachel Williams was the coxswain on that boat with freshman Debbie Martin in the stroke seat, freshman Kathleen Lopp in the three seat, freshman Emily Berguson in the two seat, and Kayla Sims in the bow.

The future looks bright for Liberty's program, with 14 of the 15 crew members who competed over the weekend expected to be back next fall and the 15th, Dieudonne, planning to return to assist Morris with coaching duties.