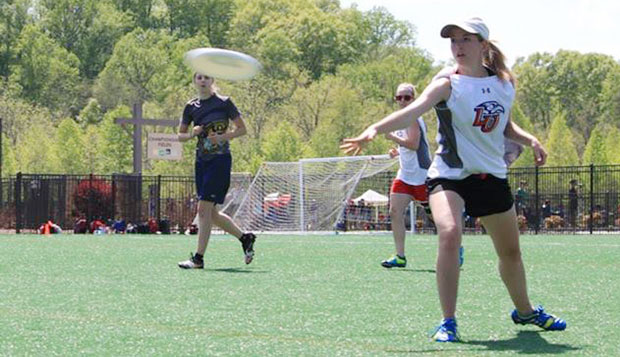 The Lady Flames, who finished fourth in last month's Virginia D-I Conference Tournament at James Madison University, recovered from a 0-3 performance in Saturday's pool play by winning two matches (one by forfeit) on Sunday.

"Liberty had never even come close to qualifying for regionals before," Lady Flames Assistant Coach Jonathan Mast said. "We were ranked 15th out of 16 teams going into regionals and took 13th overall."

Against Georgetown, Lady Flames junior Lindsey Matson forced a pressured throw from one of the Hoyas' main handlers which Liberty senior Krista Johnson intercepted in the Georgetown end zone for a Callahan goal.

Johnson paced the Lady Flames with seven goals and six assists and fellow senior Sydney Comer relieved her as a primary handler and distributed seven assists.

"It was a little bit windy on Saturday so we had to pass horizontally more than vertically and Sydney was instrumental in working it around the zone," Mast said. "Kaitlyn Kane, another one of our senior handlers, had four or five really big throws down the line."

On Sunday, the Lady Flames defeated 11th-seeded South Carolina, 15-8, before winning by forfeit over 12th-seeded Appalachian State to finish 13th.

Matson scored four goals against South Carolina and sophomore Keziah Lewellyn made a diving catch for an early point against the Gamecocks, extending Liberty's advantage to 4-2.

"That was a big confidence booster," Mast said. "Our goals going into the tournament were to win at least one game and break seed at regionals, and we did both. The win (over USC) set a new bar for the farthest either the guys or girls team has ever gone since the program started in 2010."

Complete results from the tournament are available online.

Liberty finished the season at 11-14, a major improvement from last year's 3-14 mark, when it didn't have enough players to compete in the postseason.

The Lady Flames adopted Luke 16:10 as their motto for the season.

"Whether we were winning or losing, we wanted to be faithful in the little things," Mast said. "They were willing to work hard and consistently to make up for the learning curve. I was very proud of what they accomplished and I'm really hopeful for what we can do in the fall."

Liberty expects to return all 12 players for the fall semester and build on the foundation with a strong recruiting class of freshmen.

"We're hoping to host a tournament for all of the teams in our section in September to give the younger players more experience to prepare for the spring," Mast said.