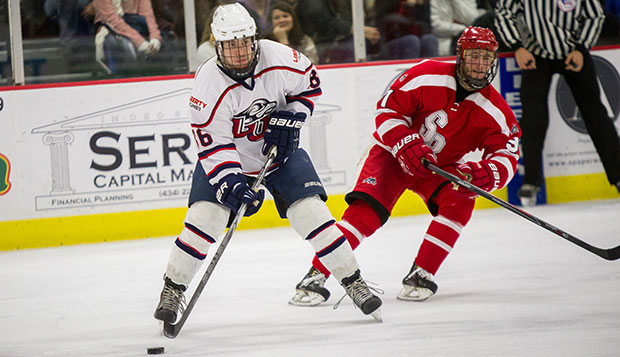 Liberty University freshman forward Robert Ward was one of four finalists for the ACHA Division I men's hockey Rookie of the Year award and earned a spot on the seven-man All-Rookie Team.

Arizona State University goalie Robert Levin, who led the Sun Devils to their first national championship, was named Rookie of the Year, becoming only the second goalie to receive the honor in the 12 seasons it has been awarded. The other 10 were forwards, including Flames freshman Brent Boschman in 2010.

Ward, who scored 20 goals and distributed 35 assists to rank as Liberty's second-leading scorer on the season, was named the Flames' Rookie of the Year at last week's Division I men's hockey awards banquet, where several of his teammates were recognized.

Two defensemen — freshman Chase Harris and sophomore Brandon Cox — were selected as Liberty's Most Improved Players. Cox was promoted from the Division II team early in the season to provide necessary depth in the defensive corps after junior Matt Sherry was lost to injury.

Senior Jackson Kuhn was selected as Defenseman of the Year.

Junior forward Lindsay LeBlanc and senior forward Andrew McCombe were named the team's Hardest Workers with LeBlanc (Liberty's leading scorer with 25 goals and 31 assists) was also honored as Forward of the Year and McCombe (who ranked third with 17 goals and 36 assists) earned the Most Valuable Player award.

For their four-year careers, McCombe scored 60 goals and distributed 90 assists in 130 games played while Kuhn recorded 18 goals and 65 assists in 141 games, ranking fourth on the Flames with 15 goals and 26 assists this season.