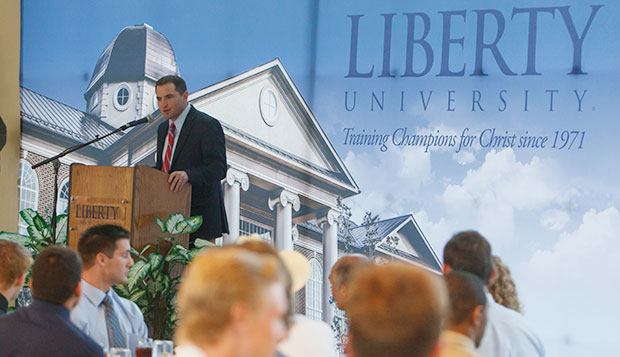 As a sign of the continued growth of Liberty University's thriving Club Sports program, Tuesday night's annual awards banquet was moved to the Club Level of Williams Stadium after overflowing the dining room in the Hancock Welcome Center last spring.

In less than six years, the Club Sports program has grown from 90 athletes competing on six teams in 2008 to more than 500 student-athletes on 32 teams, including 80 who will graduate May 10 at Williams Stadium.

Those 32 teams hosted a total of 140 events on campus this school year and traveled to nearly 200 more, with a total of 20 teams advancing to national championship competition.

"You are part of something very historic," Kirk Handy, Liberty's senior director of campus recreation and the Flames' Division I men's hockey coach, told the more then 200 athletes, coaches, administrators, and guests in attendance.

Jake Hannon, an assistant coach for the DI men's hockey team, introduced two initiatives involving Club Sports this year. The newest is the formation of the Club Sports Hall of Fame, which will be housed in the LaHaye Ice Center and have its inaugural induction ceremony Dec. 5-6. A committee is in the process of being formed which will soon receive and evaluate nominations.

The Athletics Department is also spearheading the Liberty University Varsity Club, open to both NCAA Division I and Club Sports alumni as a means of encouraging former athletes to stay connected to the Liberty community and for developing relationships through social media and fellowship at homecoming events.

In the academic awards presentation, a total of 103 students were recognized for maintaining a grade point average of 3.5 or better with 11 earning a minimum 4.0 GPA.

Frost scored a 9.175 in the finals of the balance beam at the National Association of Intercollegiate Gymnastics (NAIG) Club Championships on April 5 in Chattanooga, Tenn., tying her for ninth place. Her score of 9.1 on the vault in preliminaries also narrowly missed qualifying her for the finals.

Anderson, who won the Sept. 21 Liberty University Collegiate Triathlon on campus, placed 25th out of 1,166 finishers at the April 5 USA Triathlon Collegiate National Championships in Tempe, Ariz. He completed the 1.2-mile swim, 25-mile cycling stage, and 10K run in 1 hour, 51 minutes, 28 seconds to lead Liberty to a combined 29th-place finish out of 119 teams.

Liberty's DII men's hockey team won both of its games at the Southeast Regional Tournament, which the Flames hosted at the LaHaye Ice Center on Feb. 22-23, to qualify for the ACHA DII National Championships in Boston for the first time since 2006. It then upset Grand Valley State in the first round of pool play and beat Northern Arizona in the second round before missing a chance to advance to the Final Four with a loss to eventual national champion New Hampshire.

Rigg was named the National Collegiate Volleyball Federation Division I Coach of the Year out of more than 300 coaches in the nation before earning the same award for the Club Sports program. In his third season at the helm, he guided the Flames to the EIVA DI South Championship Tournament final and a 34th-place showing at the NCVF National Championships, April 5 in Reno, Nev., where they upset No. 17 UCLA in the first round.

Forth helped lead the Lady Flames to a third-place finish at the ACHA DI women's National Championships, March 16 in Newark, Del.