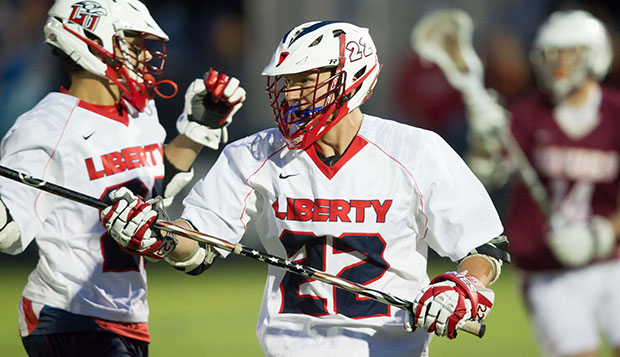 Senior Travis Briggs scored the first goal of his career early in the fourth quarter, extending Liberty's lead to 13-4.

"It's not often that a coach can say a team played a complete game, but we did everything I said we needed to do to beat Florida State," Flames Head Coach Kyle McQuillan said. "Overall, the guys just played their hearts out. They fought for ground balls, they moved the ball well on transition, they were patient and they moved the ball well (in the set offense) and they capitalized on scoring opportunities."

The Seminoles (12-1), ranked No. 16 in this week's MCLA DI poll, won the teams' first meeting, March 10 in Tallahassee, Fla. The rematch was a completely different story as Liberty (14-3, No. 22 in MCLA DI) took control in the first half, scoring three transition goals, and dominated the second half, operating mostly out of its 3-2-1 set attack.

Leading 7-3 at the half, the Flames' defense forced turnovers on FSU's first five possessions of the second half while their attack capitalized three times on the other end, making it 10-3 with 7:35 left in the third quarter.

Sophomore attack Ryan Miller (four goals) netted two of those scores, the first off an assist from sophomore midfielder Brett Bernardo (3G, 2A, who scored the second), and the third set up by junior attack Chris Armstrong (3G, 2A) from behind the net, which Miller finished with a behind-the-head shot.

"That was a fantastic finish, a fantastic goal," McQuillan said. "There were a lot of good goals, but that one was definitely demoralizing."

Miller, who earned rookie of the year honors as a freshman, was named the all-SELC DI Player of the Year as a sophomore, a rare accomplishment.

Liberty advances to face Virginia Tech, a 10-4 winner over Florida in the first DI semifinal, in Sunday's  championship game set for 3 p.m., which will be webcast live. The Flames edged the Hokies 10-8 in the regular-season finale last Friday at the Liberty Lacrosse Fields, earning them the No. 1 seed out of the Northwest Region.

"Hopefully our region gets a lot of respect, with both teams in the championship game from (the Northwest Region)," McQuillan said. "We're looking forward to it. It only adds to the rivalry which I expect to be a very good one for years to come. Virginia Tech's a great team, very disciplined, and it's very difficult to beat a good team twice."

The Flames proved that on Saturday, avenging their first loss of the season and only loss to an SELC opponent since moving up from the DII level.

"We got the opportunity to play FSU twice and we were able to fix some of our mistakes from the first time," McQuillan said. "That was their first loss on the season and there's never a good way to go out, but it's definitely a tough loss for them. We were fortunate to be on the other end of it."