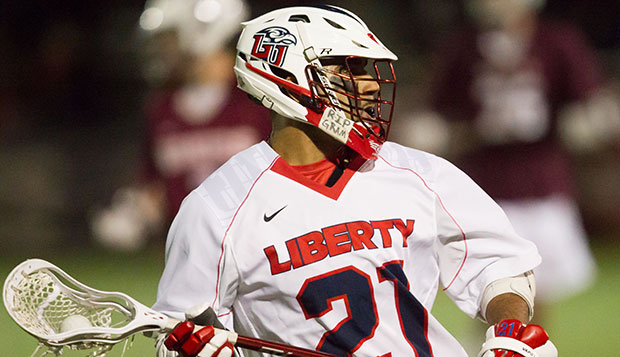 Senior midfielder Derek Haywood scored a goal and added an assist for the Flames in Friday's 15-7 victory over Vanderbilt.

Liberty University's men's lacrosse team didn't play its best in Friday night's first round of the Southeastern Lacrosse Conference Division I Tournament at Alpharetta High School, north of Atlanta, but the Flames managed to get past Vanderbilt University, 15-7.

"We played a sloppy game, but a win's a win," Liberty Head Coach Kyle McQuillan said. "We get to move on. We live to see another day and we're shifting our focus completely to Florida State."

The Flames (13-3) will look to exact a measure of revenge in Saturday's 7:30 p.m., semifinal against the Seminoles (12-0), who defeated North Carolina State, 8-5, in Friday's first round after dealing Liberty its first loss of the season, 16-11, in the opening game of the Flames' spring break road trip through Florida.

"We've beaten every SELC team we've played this year with the exception of Florida State and we get another opportunity now, which is all we can ask for," McQuillan said. "They're quick, they've got a lot of great players. We're going to have to not make mistakes or unforced turnovers because if we play anything like we did today, Florida State is going to capitalize on those opportunities."

Against Vanderbilt (5-5), Liberty got five goals and two assists from sophomore attack Ryan Miller, who ranks 15th in the nation in scoring with 46 goals and 22 assist on the season. Senior attack Kurt Tobias added four goals and one assist, sophomore midfielder Brett Bernardo netted two goals, freshman midfielder Chad Moore distributed two assists, and senior midfielder Derek Haywood had one of each to pace the attack.

The Flames led 8-4 at the half and the Commodores scored four of their seven goals on the night in man-up situations.

Saturday night's semifinal against FSU will be webcast live from Johns Creek High School, as will Sunday's 3 p.m. championship game.