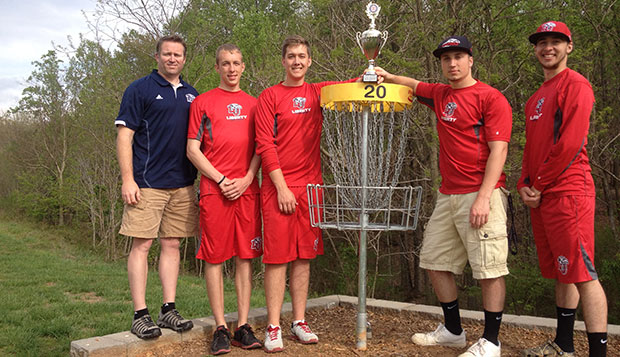 Merat, a graduate student who also serves as an assistant coach, was the only member of the Flames to qualify for the advanced finals by placing in the top 28 through two rounds of singles play. He finished at 3-over-par 164 (55-62-47) on the Hippodrome Disc Golf Complex courses, earning second-team All-American honors.

However, the most impressive performance of the tournament may have come from Liberty's Second Flight foursome, which finished first out of six teams at 38-over 763 to capture a national title, edging Texas State by two strokes to secure an automatic bid to the 2015 national tournament for Liberty's entire team.

"We accomplished our goal that we set out to come here and do, which was to earn a spot back to nationals for next year," Flames Head Coach Steve Bowman said. "Doing that for Second Flight team was huge. Now, we'll have that pressure off at the beginning of the season."