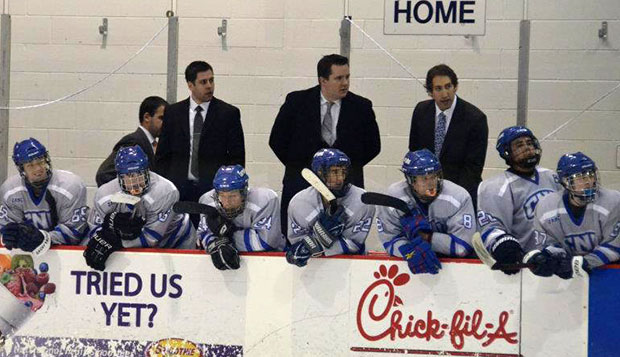 Outgoing Liberty University ACHA Division I men's hockey goalie coach Mike Binnie and his replacement, Dalton Stoltz, platooned in goal throughout their four seasons in uniform for the Flames from 2004 to 2008.

Stoltz served as Liberty's goalie coach from 2008 to 2009 while pursuing his master's degree through the Liberty Baptist Theological Seminary.

"Mike came in and relieved me and now he's tagged me back in," Stoltz said, noting Binnie is moving to New York to work for a business. "We were goalie partners and we're really good friends."

The two players, both Sport Management majors as undergraduates, had very similar stats in minutes played and goals-against average for the Flames.

After his first stint as goalie coach at Liberty, Stoltz went on to serve as a head coach for the men's hockey teams at Briercrest College in Saskatchewan, Canada, and Christopher Newport University in Newport News, Va., where current Flames Division II assistant coach Josh Tucker was his assistant.

"I love working in the local church and have also been involved in ministry while coaching hockey, sort of tag-teaming between the two," Stoltz said.

While coaching at CNU — for two years as an assistant before being promoted to the head coach position — Stoltz juggled two ministry opportunities. He served as the college and young adult pastor at Liberty Baptist Church in Hampton as well as team chaplain for the Norfolk Admirals through Hockey Ministries International's chapel program.

Currently, Stoltz is the Minister of Christian Discipleship for First Baptist Church in Roanoke, where he will commute from for Liberty's practices.

"I have a passion for God, my family, the church, and for hockey," Stoltz said. "Being a goalie coach is something I can do on the side to help Liberty continue to excel in Training Champions for Christ in the hockey world."