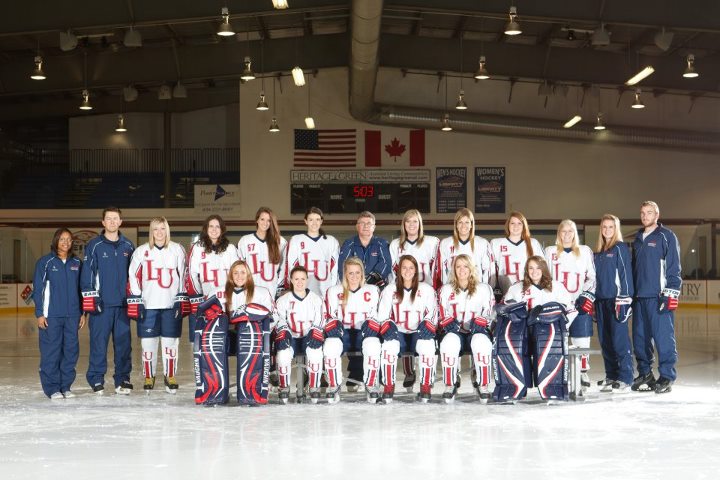 Liberty University women's hockey team played the Reston Raiders and defeated them 8-2. Just minutes into the first period, Liberty's Stacy Christiaans had already put the first score on the board and lit up the board moments later with an assist from Sarah Stevenson. Keeping with the motif, Amanda Grainger scored with an assist from Autumn Kucharczk.

In the midst of her team's scoring streak, goalie Chantal Lischynski played a strong and consistent defensive game, blocking shot after shot.

Grainger scored in a power play leading to Carly Peleshok's penalty shot, which brought the period to a close.

As the second period began, Liberty's Dani Clevanger put yet another point on the board, bringing the score to 6-0 until the Raiders Lizzy Weingast got the first score for her team.

With sixteen minutes left on the clock, Lischynski suffered a minor injury that removed her from the game. Liberty Goalie Samantha Rupp was brought into the game.

Shortly after, there was a penalty shot made by Peleshok. With seven minutes left on the clock, the Raiders got their second score of the game in a power play by Meredith Lopez.

Liberty had the last score of the game with less than two minutes left on the clock. Coming through once again was Peleshok. The final score was 8-2.

"The girls are pretty focused right now because we are heading into nationals," coach Paul Bloomfield said. "We may be a stronger team than this team, which means the tendency is to get a few goals ahead and lay off, but I stress to the girls that you have to stay focused on your game."

The team maintains its focus and competitive nature despite several injuries throughout the season. The Lady Flames have finished the season ranked in the top five of the ACHA polls. They will soon be heading into Nationals in Wooster, Ohio.

The National Championship game is March 11.