Morongell excels in first season of pro hockey with Whalers 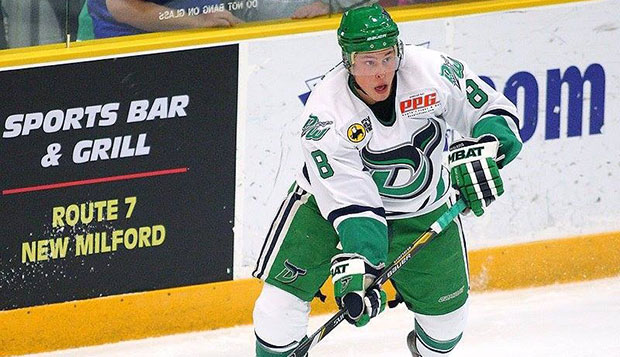 Former Liberty standout defenseman Scott Morongell has thrived in his first season in the Federal Hockey League, playing for the Danbury (Conn.) Whalers, who are on the verge of clinching their second straight league championship.

The Whalers went 37-11-8 to edge the Dayton (Ohio) Demonz for the regular-season title before meeting them again in the best-of-five championship series.

"We played a 56-game season and it basically came down to last game (against Dayton) for first place," Morongell said, noting 3,150 fans witnessed the Whalers' final home game of the regular season. "We have the most fans in the league. We ended up winning, 3-2, which gave us a bye to the championship. Overall, it was a very successful season for the team. It's been fun."

On a team that showcases several prolific scorers, with six players who scored 40 points or more, Morongell ranked seventh with 38 (six goals, 32 assists). He helped anchor a defense that has held opponents to fewer than three goals per game.

"Our defense is pretty strong overall and we have very talented forwards as well," Morongell said. "The two rookies of the year both came from our team so there's a lot of talent."

The Whalers' players hail from all over the world, at all different levels.

"We have three guys from Russia, guys from Canada, a guy from North Carolina, (guys from) all over," Morongell said."I'm playing with two guys who played in the American Hockey League and they bring a great presence into the locker room every game."

The adjustment from playing in the ACHA to the FHL, an A League, hasn't always been easy for Morongell.

"In college hockey, you don't play as many games, mostly only on Friday and Saturday," Morongell said. "Here, at some points of the season, we play eight games in 10 or 11 days and have to repeat that the next week. It's a fairly short season, but they pack more (games) in."

There are only 18 players on the roster, and sometimes as few as 13 traveled on road trips, meaning Morongell rarely came off the ice.

He came in with the build to withstand the punishment and grind of battling on the back line day-in and day-out.

"It's a very physical league," Morongell said. "You've definitely got to take care of your body off the ice."

"He just worked so hard," Kuhn said. "He's a great skater to make the stride to play at that next level. He did really well this year and he's really enjoying it. He's looking to make the jump up to some other league as well."

Morongell met with an agent in late March in New York who he will work with next season when he hopes to play in either the Central Hockey League, the East Coast Hockey League (ECHL), or Southern Professional League.

"The American Hockey League would be a bit of a stretch for the next year or two, but if I get the right bounces, I'd like to play in the ECHL or the Central Hockey League, which are both AA," Morongell said.

He stays in contact with Liberty, and followed the Flames' success this past season from afar.

"I still talk to a lot of my teammates and the coaching staff and get a lot of support from families at Liberty," Morongell said. "Liberty's got a great program and had another successful season this year. They're definitely moving the program to the highest level possible. The whole school overall is a first-class organization."