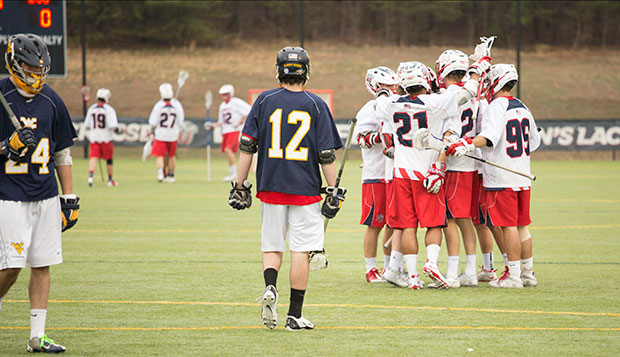 Liberty celebrates one of its seven first-half goals as two WVU defenders look down with a zero on their side of the scoreboard.

Though Liberty University's men's lacrosse team's 12-2 triumph over West Virginia University 12-2 — played on a cold and wet night at the Liberty Lacrosse Fields — didn't have a playoff feel to it, head Coach Kyle McQuillan doesn't have to remind the Flames that the SELC Division I tournament is just around the corner.

The fourth win in a row for Liberty (11-3, 4-0 SELC DI Northwest Region) clinched an SELC playoff berth in its first season at the MCLA Division I level, setting up a showdown with Virginia Tech (9-2, 2-0) April 18 at home to determine the top seed out of the region.

"We're nearing the end of our season," McQuillan said "We're kind of in the fourth quarter and we don't have a lot of games left so if you want to be peaking, now is the time to be doing it and I think we're heading in that direction.

"We've come off of a couple games now just playing very consistent and good on both sides of the ball," he added. "We've really tried to put a focus on the little things  — getting the ground balls,  winning the faceoffs, the possession game — the last couple of weeks and it's starting to pay off."

Liberty got a usual stellar game in goal from junior Ethan Kamholtz, who made 16 saves as the Flames were actually outshot, 44-37.

"I guess that was their game plan, to fire early and often," McQuillan said. "Fortunately for us, not many of them were finding the net. It's a lot more shots than Ethan's ever seen and, obviously, Ethan today had his best numbers of the season. Two goals against is not a bad day."

Kamholtz made a kick save of a third consecutive shot by sophomore forward Clayton Johnson from close range in the right crease before Liberty sophomore forward Ryan Miller finished a fast-break counterattack for the game's first goal with just under eight minutes left in the first quarter.

Miller, who leads the Flames with 42 goals and an average of 4.5 points per game, scored the next three goals over the ensuing 15 minutes, the second with the Flames on a man advantage in the final two minutes of the first quarter off an assist from sophomore midfielder Bryce Mrakovich. He received the pass on the left wing and slung a sidearmed shot into the upper right corner of the net past WVU sophomore goalie Patrick Flynn.

"My favorite guys to watch are Bryce carrying the ball up the field and Miller finishing," Kamholtz said. "They're spectacular at what they do and I appreciate them being on my side."

Freshman defender Nate Whyte sparked Liberty's transition game with a defensive stop and clear to senior attack Kurt Tobias. He received a return pass seconds later on the left endline and finished with a wraparound bounce shot from 20 feet out to extend the lead to 5-0 with 6:36 to go in the half.

Mrakovich (3 goals, 2 assists) added a turnaround score a minute and a half later before junior attack Chris Armstrong (1G, 1A) worked the ball out from behind the cage and released a shot falling down that got past the goalie to make it 7-0 at the half.

Miller was sidelined with a hip flexor injury early in the third quarter but the Flames' attack kept the heat on, even as the temperature dropped. Derek Haywood (1G, 3A) set up Liberty's  first two goals of the second half — the first by Mrakovich and second by long-stick midfielder Michael Zumpano — to make it 9-0 before the Mountaineers (2-3, 4-5) finally ended the shutout with 7:35 left in the third.

"We really want to get that shutout this season, but we haven't been able to pull it off," Kamholtz said. "We've been pretty close, so I'm proud of the guys to hold them to two. It was good."

After Mrakovich started the fourth-quarter scoring by rifling a shot from the left side into the upper right corner, freshman middie Chad Moore ended it with 5:44 to go by finishing from a tough angle on the left wing off an assist from Mrakovich.

McQuillan met with WVU Head Coach Michael Barberi after the contest and agreed to give him some pointers in running the Flames' high-octane offense.

"He's a first-year coach so that was a situation I found myself in four years ago," McQuillan said. "That's what's great about the MCLA and the sport of lacrosse because it's growing is you have the opportunity to share information. That's what I do. Everything I do that's even close to good is stolen from another coach."

Liberty won't likely be doing the same type of exchange with Virginia Tech after next Friday's contest, knowing the two teams could meet again in the SELC tournament.

"Virginia Tech is ranked now and we're not and it's about making that statement on a national level as far as who we are," Kamholtz said of the Hokies' No. 25 MCLA DI ranking. "We know we're better than Virginia Tech and we're going to prove it then. We haven't played them before, so it'll be the first time. I think it'll create a nice rivalry for us."

On Tuesday, Liberty made its debut at No. 25 in the seventh MCLA DI Poll, replacing the Hokies, who bumped up to No. 23.