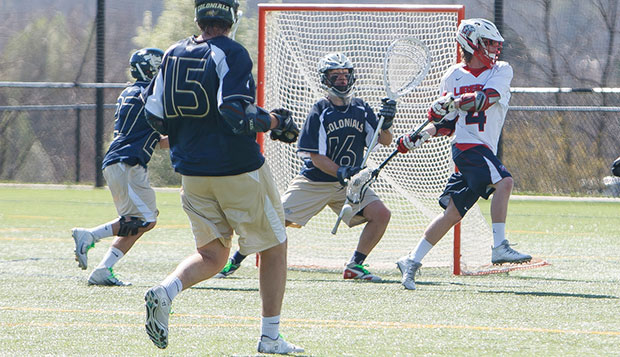 Several former players were in attendance to see Liberty University men's lacrosse team win its 40th game since the program was re-established in 2010, a dominating 19-6 victory over George Washington University, Saturday afternoon at the Liberty Lacrosse Fields.

"Our overall record is now 40-13 and as a program, I know, it was special because we had some of the alumni here and it's just neat to be able to see the growth and the success that we've had in the four-year period," Flames Head Coach Kyle McQuillan said.

Liberty, now 10-3 overall and 3-0 in the Northwest Region of the SELC in its first season competing at the MCLA Division I level, improved to 10-0 at home over the past two seasons by opening a 13-1 halftime lead and cruising past the Colonials (3-6, 1-2).

"We were able to do what we wanted to do right from the get-go and jump out on them pretty quickly and just continue to eat away (at the clock)," McQuillan said. "This was similar to the Wake Forest game (a season-opening 21-1 triumph) where we just took them out of the game very early and we were able to relax and play possession lacrosse for the rest of the game, which was good."

With only two regular-season games remaining, including an April 18 home date against Virginia Tech that could decide the regular-season champion and top seed heading into the SELC DI Tournament, McQuillan said the Flames realized how significant the contest was toward their first-place standing and came out firing on all cylinders.

"The guys understand how important regional games are and that was the motivating factor today," McQuillan said.

After Liberty sophomore Ryan Miller (4G, 4A) put away Armstrong's pass from behind the net with a sidearm shot from short range less than a minute later, Moore quickly answered the first of three goals by Colonials midfielder David Goscinak by controlling the ensuing faceoff and taking it all the way in for the first of his three scores. That pushed the lead to 4-1 at the end of the first quarter and the rout was on.

Moore went three-for-five on faceoffs in relief of sophomore faceoff specialist Charles Fianko, who went 14-for-23 and also scored a goal directly after winning one.

GWU started the second half with back-to-back goals by junior attack Charles Frattini, but the Flames responded with yet another rapid score off a faceoff, this time with a series of passes from Fianko to senior attack Kurt Tobias (2G, 1A) to Miller to Armstrong for a point-blank, open-net finish.

That triggered five more goals in the span of 57 seconds Liberty unloaded on the Colonials, opening a commanding 18-3 advantage.

"This is a good game to be able to kind of motivate ourselves and catapult ourselves," McQuillan said. "It was a good tempo, so it was the best kind of game we could hope for with the short turnaround that we've got."

"We're going to treat West Virginia the same way we treated GW, as a regional opponent and as a must-win," McQuillan said. "That's just got to be our focus."