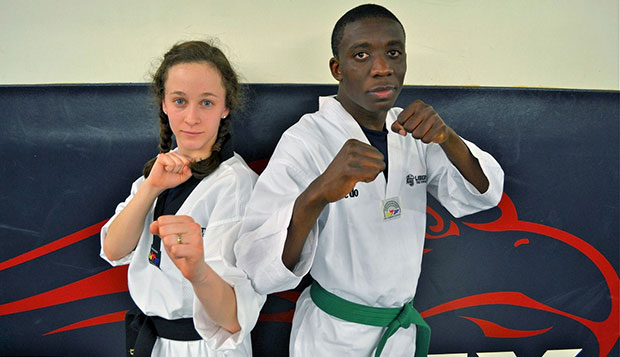 Danielle Gallagher and Biranganine Ntibonera will be Liberty's first two representatives at the 39th annual NCTA Nationals, April 4-6 at the University of California, Berkeley.

Teams and individuals from across the nation will travel to the University of California, Berkeley, from April 4-6 for the 39th annual National Collegiate Taekwondo Association Nationals. Among them, for the first time, will be two members of Liberty University's tae kwon do team —Danielle Gallagher, a first-degree black belt from Stafford, Va., and Biranganine "John" Ntibonera, a green belt from Congo, Africa.

Liberty Head Coach Jesse Wilson and assistant coach Brian Preiser expect this to be the first of many trips to NCTA Collegiate Nationals for members of the rapidly developing second-year program.

Gallagher, a freshman studying criminal justice, has been training under Olympic Gold Medalist and Team USA Coaching Staff member Arlene Limas, who owns and operates Power Kix Martial Arts Studio in Stafford and is a sponsor of Liberty's team, providing training camps throughout the season.

Ntibonera, a speech communications major, fled from Congo to Kenya when he and his family evaded rebels who were trying to kill his family for preaching about Jesus. After arriving in North Carolina, he began to attend Liberty and soon joined the Flames' tae kwon do team for fun and exercise.

With no previous formal training, he had received no promotions, and therefore had nothing to show for his hard work. Liberty's coaching staff quickly noticed his talent and began to examine him for a possible promotion. In early 2014, Ntibonera was officially awarded his green belt by ninth-degree black belt Grandmaster Ju Hun Kim and Wilson, who received his black belt from Kim in 1987.

Gallagher and Ntibonera are continuing to train for their biggest event of the year and are expected to do well in their respective divisions. Champions in the Black Belt competitions will have the opportunity to represent the collegiate Team USA at the World University Games in China this summer.