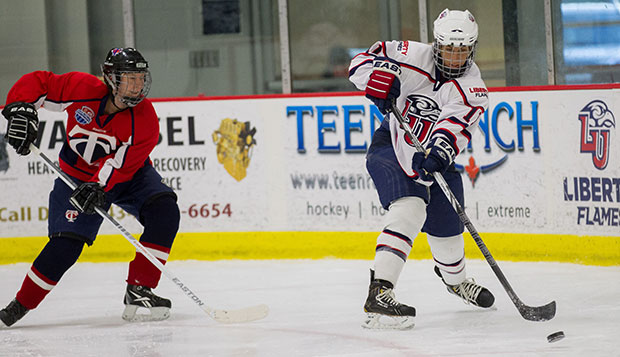 Liberty sophomore forward Sarah Stevenson (11) lines up the puck in a recent contest at the LaHaye Ice Center.

It was difficult enough for Liberty University's ACHA Division I women's hockey team to regroup and get back up for last Sunday's consolation final against Rhode Island the morning after losing to eventual ACHA DI national champion Miami (Ohio) University in the semifinals.

As Lady Flames Head Coach Paul Bloomfield discovered this weekend, it is even harder to keep players motivated for back-to-back exhibition games against a U-19 travel team from Maryland when their goals have been accomplished and their season is essentially done.

Three weeks after losing a 2-0 lead in the third period of a 4-2 defeat in Rockville, Md., Liberty (17-13-5), which beat Rhode Island 2-1 in overtime to clinch third place in the ACHA DI National Championships, was swept decisively by the Washington Pride, losing 7-0 on Saturday afternoon and 4-1 on Sunday morning at the LaHaye Ice Center.

Junior Chantal Lischynski, who was named to the all-tournament first team after a stellar showing in the ACHA DI National Championships, played all 120 minutes in the cage. That's because sophomore goalie Kristina Toppazzini, who started in the Lady Flames' 3-0 upset of Robert Morris Illinois in the third round of pool play, was nursing a knee that she sprained in a Feb. 23 exhibition game against the Tri-City (N.C.) Selects, Liberty's sixth straight win.

With the season officially behind them, the Lady Flames will try to forget this weekend and focus on their run of success in the playoffs before gearing up for next season.