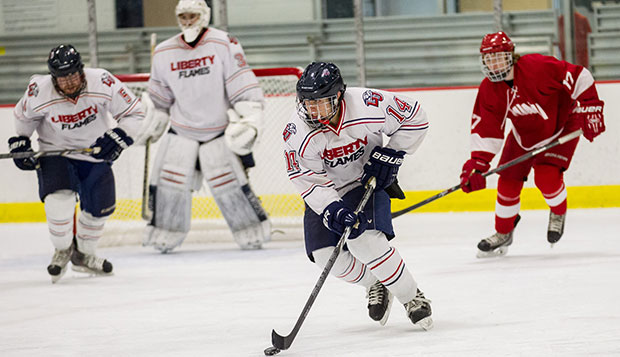 Liberty forward Paul Ingles (14) skates out of the defensive zone in front of defenseman Ryan Sidun (5) and goalie Cary Byron during the Flames 4-2 Southeast Region tournament triumph over Miami (Ohio), Feb. 23 at the LaHaye Ice Center.

The last time Liberty University's ACHA Division II men's hockey team qualified for the National Championships, in 2006, there was no Division I team.

That year, the Flames made it all the way to the championship game before falling to Oakland (Mich.) University in overtime.

This year's Liberty squad finally got out of the Southeast Region tournament, held for the first time at the LaHaye Ice Center, with a 4-2 over Miami (Ohio), after reaching the second-round qualifying contest for a fourth straight season.

The Flames practiced at LaHaye one final time on Wednesday afternoon before embarking on an overnight bus trip to Boston. They will practice at the New England Sports Center in Marlborough, Mass., on Thursday before opening tournament play there Friday morning.

"We're excited," Liberty Head Coach Chris Lowes said. "We would have liked to have played the week after regionals to keep that momentum going, but, hopefully, the guys are rested and we can pick up where we left off. They've got the weight off their shoulders (from winning at regionals) and it's allowed us to say, ‘We're not just content going there. We're going there to win and perform at our best.'"

To advance to Tuesday's ACHA DII final, the Flames (23-7-1), seeded fourth out of the Southeast, must first be tried by fire in an extremely challenging four-team pool.

The Flames will face West Region representative Northern Arizona (20-11-1) in Saturday's second round at 2 p.m. before taking on Northeast Region qualifier New Hampshire (18-6) on Sunday at 12:30 p.m.

"We know a little bit about each of them and know they're all going to be tough in different ways," Lowes said.

Only the team with the best record out of each of the four pools advances to Monday's semifinals.

The schedule for all four pools is available online and all games will be webcast live on pay-per-view.

Lowes said the Flames must execute their game plan to perfection for not just 60, but 180 minutes in order to have a shot of advancing out of their pool.

"That's a lot of hockey to play perfect games, but that's our goal going in," he said. "We'll put everything into winning that first game against Grand Valley, the favorite to get out of our pool, and we'll know right away where we stand."

To be successful, Liberty will have to contain opposing team's high-powered attacks.

"We're just going to control what we can control and that's the defensive end," Lowes said. "We clearly need guys to step up and score some big goals for us, but we can't afford to get into shootouts against teams of this caliber. We definitely aren't looking to run-and-gun or go back and forth with them."

Grand Valley features one of the most dangerous offensive lines in the country, led by junior forward Brad Wilhelm (24 goals, 16 assists).

"We want to keep teams to two goals or less by playing good defense with all of the forwards contributing," Lowes said. "We've got to get guys swarming and eliminating second chances and rebounds. Everyone's going to have to be ready to shut down."

Offensively, the Flames will lean on lines centered by junior Johnny Cotton and sophomore Paul Ingles (20G, 22A), flanked by brothers Brad (35G, 37A) and Devon Docksteader (29G, 28A), their top two scorers on the season.