Freshman Diehl lone finalist for Flames, who slip to third 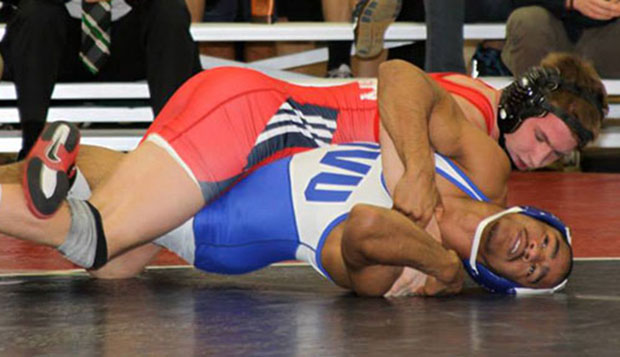 Liberty freshman Ryan Diehl has pinned two of his opponents and scored technical falls against the other two en route to Saturday's championship final against MIT's top-seeded Sam Shames.

Liberty University's wrestling team slipped from second to third place after the second of three days at the National Collegiate Wrestling Association Championships, Friday at the Allen Event Center in Allen, Texas.

The Flames, who have placed third in the past two NCWA national tournaments, started the day with championship quarterfinalists in seven of the 11 weight classes. They finished with just one wrestler advancing to Saturday's championship finals, two less than last year and four fewer than two years ago.

Liberty freshman Ryan Diehl reached the championship by pinning Penn State-Mont Alto's Jimmy Hughes in 5:22 in the quarterfinals and scoring an 18-2 technical fall over Grand Canyon's John Lin Estrado in the semifinals. Diehl will get his long-awaited match against top-seeded, undefeated, defending national champion Sam Shames of the Massachusetts Institute of Technology in Saturday's final. Shames has pinned three opponents and scored a tech fall against a fourth.

Flames senior 197-pounder Aaron Thompson and 184-pounder Royal Brettrager were both sent to the consolation bracket in the semifinals. Thompson scored a 14-1 major decision over Saginaw Valley's Wayne Sanders before coming up just short in a 3-2 decision against Central Florida's Tyrell Walker.

At 125, Liberty freshman Timothy Nordan lost his quarterfinal match by 10-2 major decision to Grand Canyon's AJ Salazar. He was then eliminated by the University of Texas-Arlington's Michael Dauterive, who recorded a fall in 5:56 of his first consolation match.

Flames sophomore 149-pounder Peter Tatanish defeated the USC's Nicholas Cegelski, 4-2, in his quarterfinal match before falling to the consolation bracket with a 7-4 setback against Grand Canyon's Mike Hamel. He will face the winner between Air Force's Robert Walker and Marion Military's DeAndre Beck in the consolation semifinals.

In the 157-pound division, Liberty junior Chase Boontjer lost a 4-2 decision to Grand Canyon's Bryant Wood in his quarterfinal bout and wrestled Patrick Foxworth of The Apprentice School in the consolations.

At 165, Flames freshman Josh Ferenczy came up on the short end of a 3-1 decision against Navy Prep's Drew Daniels in the quarterfinal round and was eliminated by Alabama's Frankie McKeown, who pinned Ferenczy in 5:55 in the consolations.

Liberty junior Keyshaun Ward won his 174-pound quarterfinal over FGCU's Giovanni Jiovenetta, 7-5, before narrowly missing advancing to the finals with a 5-4 semifinal setback against Army Prep's Parker Maytrott. Liberty freshman Josh Sturgill defeated FGCU's Jimmy Keegan by fall in 6:42 and Washington State's Joe Traverso by 6-4 decision. He will face Jiovenetta in the consolation quarterfinals before Ward awaits the winner between Wayne State's Jon Williams and Navy Prep's Robert Manier in the consolation semifinals.

Saturday's consolation quarterfinals start at 9 a.m. with the championship finals beginning at 3 p.m. and the All-American banquet set for 7 p.m. Live results will be posted online and video footage is available as well.