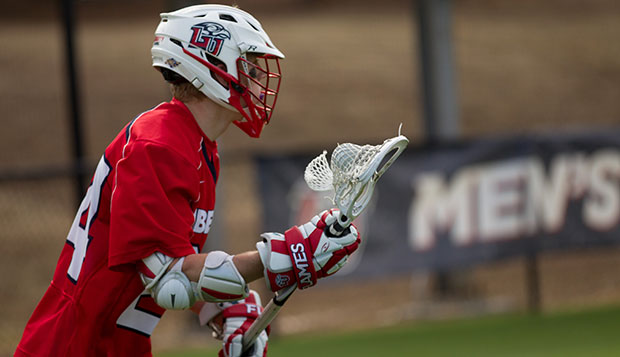 In a showdown between the last two undefeated teams in the SouthEastern Lacrosse Conference — both ranked just outside of the top 25 of the latest Men's Collegiate Lacrosse Association Division I poll — Florida State University used a six-goal surge midway through the contest to take control of Liberty University, Monday afternoon in Tallahassee, Fla.

The Seminoles (5-0, 2-0 SELC, South East Region) defended their turf — Bill Harkins Field, adjacent to FSU's football stadium — with a 16-11 triumph in the opener of the Flames' four-game spring break tour of Florida. The game was played in 80-degree temperatures and humid conditions.

"The heat may have had a little to do with it, but at the end of the day, we didn't play our best game," Liberty Head Coach Kyle McQuillan said. "We didn't play Liberty lacrosse."

The Flames had fresh legs for their first of four gamea in five days and were well rested after traveling overnight on a sleeper bus, but didn't answer the bell from the start.

"The loss isn't that concerning for me," he added. "It's very rare to have an undefeated season and it does provide us a great opportunity to show what we're made of, and to see how we respond to adversity. We have a lot to learn from the mistakes we made here today."

Liberty (4-1, 2-0 SELC, North West Region) fell behind for the third straight road game, rallying from a 4-1 deficit to tie the game at 4-4 on a man-up goal by sophomore attack Ryan Miller. FSU scored the next three goals before the Flames pulled back within 7-6 and the Seminoles retaliated with six unanswered goals to seize a commanding 13-6 lead.

"We had to play from behind a lot," McQuillan said. "From my perspective, we just weren't doing the little things well. We weren't winning the ground balls and we were letting the ball find the back of the net too easily."

Liberty put together a 3-0 run of its own with scores from sophomore attack Brett Bernardo (2G), senior attack Kurt Tobias (2G, 2A) assisted by freshman midfielder Chad Moore (1G, 2A), and sophomore middie Bryce Mrakovich (1G, 1A), trimming it to 14-10. Junior defensive midfielder Craig Darling cut it back to 15-11, but the Flames would get no closer.

"We had the momentum, obviously, and I'm happy with how we finished," McQuillan said. "You never want to be in a position in the fourth quarter where you have to come back from a six-goal deficit. We just have to get better at starting. We've got to get a lead early and be able to protect it."

While FSU dominated in the ground ball and shot departments, one bright spot for Liberty was sophomore faceoff specialist Charles Fianko, who won 16 of 29 chances against one of the best faceoff players in the SELC.

Liberty's change in latitude this week is excellent preparation for the postseason, considering the SELC DI Tournament will be played in Georgia in late April and the MCLA DI National Championships will be contested in California in early May.

"That was the hottest weather we've played in in a long time," McQuillan said. "It's pretty humid down here. It adds a different element to the game. It's good to test yourself in those environments. Our main goal is to win an SELC championship and to make (MCLA DI) nationals. Both will be played in warm-weather locations, so we've got to get used to the heat and humidity."

McQuillan wouldn't be surprised to meet the Seminoles again in the SELC playoffs, and he expects the Flames to be ready if and when they do.

For now, after a three-hour trip to Kissimmee, Fla., the Flames are fully focused on Tuesday's opponent, South Florida (4-3) in Tampa, starting at 7 p.m.

"The good thing is we are going to have an opportunity to respond very quickly," McQuillan said, noting Liberty will have Wednesday off before playing at Central Florida on Thursday at 7 p.m. and Florida on Friday at 6 p.m.