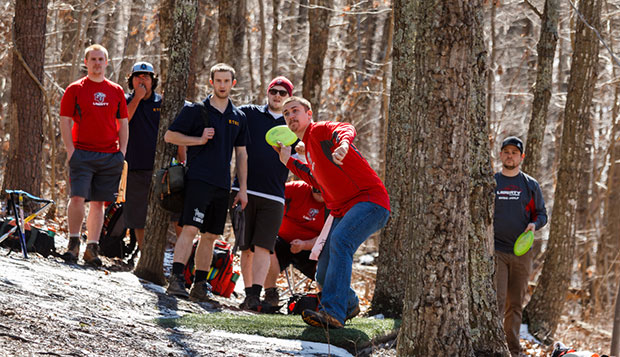 Flames junior Jordan Strother helped seal the team title with his final round of 42, three lower than Liberty's fourth scorer.

Friday's fresh snowfall was still on the ground through the woods for Saturday's doubles play and it left mud in its place as it melted. Sunday brought wind gusts through the valley that made it difficult to anticipate where drives off the tee pads would land. But the weekend's overall weather was favorable for tournament play.

Five of the seven teams in the tournament field, plus Liberty's ladies trio, had already qualified for the April 16-19 National Collegiate Disc Golf Championships in North Augusta, S.C. That included both the championship and first flight teams for Liberty and ETSU as well as North Carolina State University's championship flight team. So sixth-place St. Vincent's College and seventh-place West Virginia University received the tournament's two automatic bids to nationals.

"It was good competition," Flames junior Jordan Strother, who shot the 42 to help Liberty hold off ETSU (119-201-118-438). "Just to see the different skill levels of everybody, it was good preparation for nationals."

"Everybody played great today," Flames senior Devin Swartz added. "Jordan (Strother) had a really clutch second round for us. If he hadn't had that round, we would have tied, so that was a really important round."

The Flames expect to have Lance Brown, the individual champion at the Northeastern Collegiate Championships in Pennsylvania in October, back from an injury to his throwing hand in time for next weekend's final BRAWL Series event in Bedford, Va.

They will have another month to prepare for their trip to South Carolina, where they secured a first-round bye after also winning the Northeastern team title.

"We'll have possibly an even better team for nationals," Swartz said. "We've had two 25-plus finishes so far, so we'd really like to get into the top 10 if not win it. It's not out of the question. We definitely want to have a much stronger presence this year."