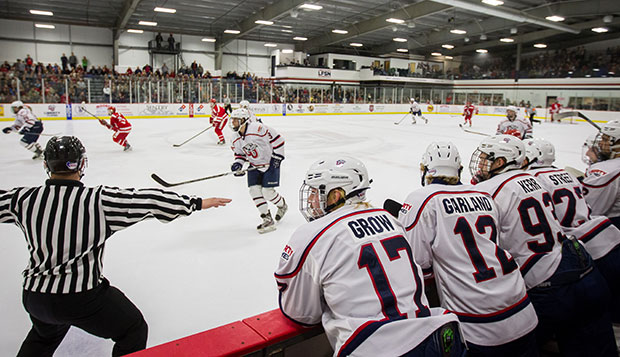 Experience will be one factor in favor of Liberty University's ACHA Division I men's hockey team as it opens play in the 2014 National Championship tournament Friday at 11 a.m. at the Fred Rust Arena in Newark, Del.

The Flames (29-6-2) will face No. 13 Naval Academy, a 2-1 winner over No. 20 West Virginia in Thursday's first round. Both the Midshipmen (26-6-2) and the Mountaineers (15-17-3) received autobids into the tournament as champions of the Eastern Collegiate Hockey Association and College Hockey Mid-America, respectively.

Since reaching the ACHA DII National Championship game in 2006, Liberty has advanced to the ACHA DI tournament seven of the eight seasons it has sported a DI team. For the four seniors on this year's squad — forward and captain Andrew McCombe, defenseman and assistant captain Jackson Kuhn, goalie Blair Bennett, and forward Caleb Grow — this will be their third straight trip to nationals.

"That's a good thing about our group of guys, the strong senior leadership," Flames Head Coach Kirk Handy said. "The intensity level is pretty much there in practice. I don't think we have to generate it. It's already there."

Liberty embarked on its final road trip of the season back to Delaware — where they split two games with the 2012 ACHA DI champion Blue Hens on Jan. 28 and Feb. 1, snapping their only three-game losing skid of the season — after practice late Wednesday afternoon.

It watched the Navy-West Virginia game to get a scouting report on their first-round opponent.

"We'll practice Thursday afternoon and then get ready to go for Friday," Handy said.

The Flames, ranked No. 4 in the latest ACHA DI computer poll, are not looking past anyone in their path to the national championship. Liberty is hoping to become the 10th different team in the past 12 ACHA DI tournaments to raise the Murdoch Cup, the trophy awarded to the winner.

"We're just going to take each game as it comes," Handy said. "We're going to make sure our group of guys is ready to go and we're not going to focus on who we're playing or who we might be playing."

The Flames played eight of the teams in this year's National Championship field, facing five of them four times. They went 20-6-2 against those eight teams.

The tournament bracket shows the matchups for all 20 teams in the field, with times and potential opponents for all 19 games concluding with Tuesday's 7 p.m. championship final. All games will be webcast live on a pay-per-view basis.

During Tuesday afternoon's practice at LaHaye, Liberty showed the speed on the ice that could give it an edge over their opposition, especially playing on the Olympic-sized rink Rust Arena features.

"It's getting the legs moving … that type of stuff that's going to be a benefit playing on the big ice," Handy said. "We're really trying to be intentional about what we're doing out here in the drills we're running in practice.

"A lot of it is doing the same type of stuff we've done all year," he added. "That's made us successful and we're going to keep doing it at this time of year."

The Flames have prepared and positioned themselves for a deep run in the six-day tournament, with a rest day on Saturday.

"Our guys are healthy and we're ready to go for the first game," Handy said. "Our goals haven't changed since the beginning of the year, it's been there, and I believe this group of guys is well prepared and knows what to do going in."