Flames use home courts to advantage in last MACRC event 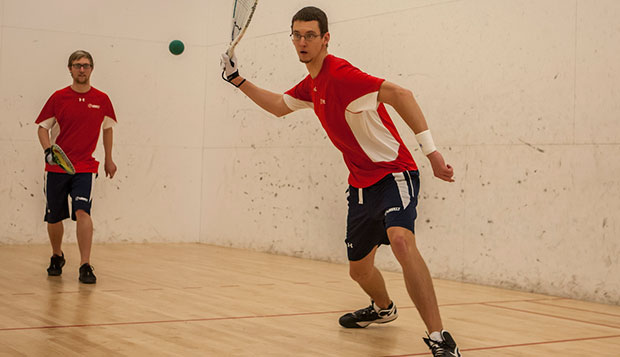 Due to a conflict with another major tournament in Charlotte, N.C., two of the conference's top teams, Duke University and North Carolina State University, did not show up, leaving the door open for the Flames to move up in the final MACRC regular-season standings.

"Every match we play, there's a point system and this tournament's going to make a difference," Liberty Head Coach Danny Rodriguez said. "I'm hoping we move into first as a team."

Liberty's six women's players were the only females in the tournament and wrapped up their conference title without contention.

"We went from playing against each other, our first (tournament), to playing together and it really solidified our season," said Morley, who is left-handed and complements the right-handed Lindsey perfectly. "Abby has been my best doubles partner that I've competed with and I can always depend on her to get those shots on the other side of the court."

The Flames' men, meanwhile, turned in strong performances with the doubles tandem of seniors Joel Denney and Ryan Evans defeating Liberty junior David Schreck and sophomore Eric Piering for second place in Division I of the Gold bracket.

"We're a pretty good team because having the left-handed guy (Denney) on the backhand side and the right-handed guy (Evans) on the forehand side it's a good combination and it fools a lot of teams," Evans said.

Since he is not a full-time student, Evans is not eligible to compete at the March 10-14 USA Racquetball Collegiate National Championships hosted by N.C. State in Raleigh, N.C. Denney and Schreck, who defeated Piering in the Red DI-II singles final, are likely to team up there.

"We're still working on getting to nationals," Rodriguez said. "Last year, and for decades, it's been held in Arizona. This year, it's over our spring break at N.C. State and there will be up to 60 teams there."