Lady Flames tie for 10th in intercollegiate event at LaHaye 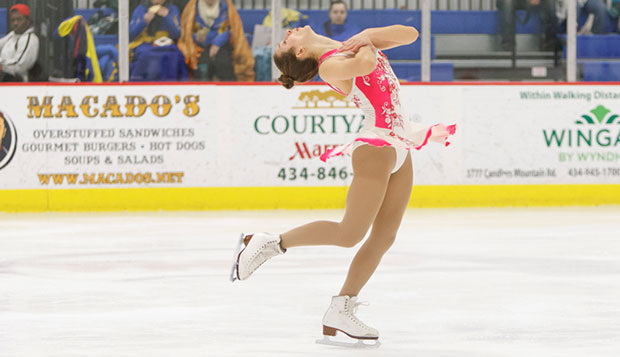 "The level of competition was actually much more advanced than the last time we hosted this event, when we didn't have as many schools here," Lady Flames Head Coach Tatiana Payne said. "We had a couple good performances, a couple girls who skated their best and had clean skates. But we have a long ways to go" before the next Intercollegiate competition, March 22 in Newark, Del.

Liberty, which skated without two of its top performers, tied for 10th out of the 16 teams and 144 individual skaters with six points.

"The top three schools that came have a lot of depth within their programs," Payne said. "Boston University had over 23 skaters and each skater could compete in as many as five events. After gauging what the competition is like, I think we'll be a little better prepared going into Delaware."

"It was a good, solid performance," said Hicks of her 1-minute, 39-second routine on Saturday morning. "The Preliminary skate was definitely the highlight. I think I did as best as I could have done. It was pretty exciting. It was fun to represent Liberty."

She danced to the Tango from the movie "Another Cinderella Story" and incorporated a series of jumps and spins into her program.

"It was upbeat and fun," Hicks said. "It had a waltz jump and a sit spin and a flip-waltz jump-toe loop combination, a Salchow and then a change of foot spin. The artistic impression was my favorite part."

Kovar, who attempted a double axel in her short program that placed sixth, also earned one point for her fifth-place finish in the Ladies Novice Freeskate, which included double toe, double loop, and double Salchow jumps.

Novice is the third-highest division in USFSA, behind only Junior and Senior, which is Olympic-level. This is Kovar's first season on the team and it was the first competition the Lady Flames have entered.

"It was good to get to know what I'm going to be competing against and to just get a feel for it," she said. "Now I know what I need to work on and change."

She is looking forward to competing on the Olympic-sized rink at Delaware's Fred Rust Arena, the same rink Liberty's ACHA Division I men's and women's hockey teams will play on over the next two weeks.

"I think it will be easier for me because I like skating big," Kovar said. "I like skating all the way to the boards and getting a lot of speed so l like the bigger rinks."

Liberty's only Senior-level skater, senior Kelly Pollack, had to pull out of the weekend competition with a back injury, but could recover in time to travel with the team to Delaware.

"We anticipate those who are injured will be ready to go and we will be able to compete in 20 events," Lady Flames Assistant Coach Dawn Harter said.