Flames take a while to warm up before burning Volunteers 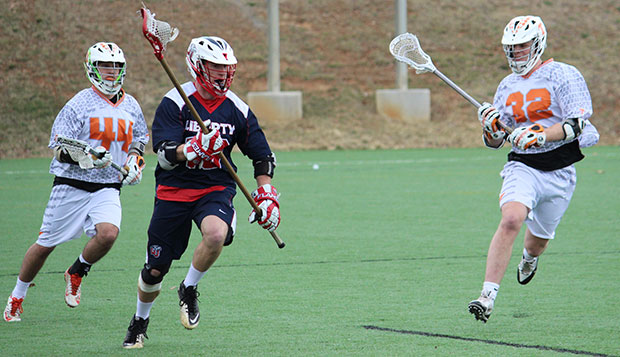 Through four games of its first season competing in Division I of the Men's Collegiate Lacrosse Association (MCLA), Liberty University is one of just three Southeastern Lacrosse Conference (SELC) teams that are still undefeated.

The Flames (4-0, 2-0 SELC Northwest Region) followed the same formula in Sunday's 15-5 victory at SELC Northwest Region opponent Tennessee as they had in Saturday's 22-7 triumph at Kentucky, starting slowly in the first quarter before kicking it into overdrive in the second.

For the second straight game, Liberty found itself in a 2-2 tie after the first 15 minutes.

"Tennessee came out and were ready to play," Flames Head Coach Kyle McQuillan said. "I was very impressed with their level of play. They jumped out on us quickly, getting the faceoffs early and scoring twice on their first three shots. I don't want to say we underestimated them, but their defense was pretty stout. We were getting a lot of shots, but weren't capitalizing."

This time, Liberty responded with five unanswered goals to seize a 7-2 lead by halftime before continuing to pour it on the Volunteers (2-3, 1-1) in the second half, outscoring their hosts 4-2 in the third quarter and 4-1 in the fourth.

"It took us a little time to find our rhythm, but we did," McQuillan said, noting junior defensive midfielder Craig Darling scored the Flames' fourth and sixth goals. "Craig Darling is a guy who has come through for us and who has had a great start to his season. He's definitely been a bit of a surprise to coaching staff and the team."

When Liberty struggled early finding seams in the Volunteers' stingy defense, sophomore midfielder Brett Bernardo converted on two spectacular shots from the outside, finishing with three goals and one assist.

"We weren't able to get much penetration on the inside," McQuillan said. "They were defending the crease pretty well. A lot of our success early on was from the perimeter where (Bernardo) was able to beat the goalie clean. His goals got the guys excited because we did have that slow start."

Liberty sophomore faceoff specialist Charles Fianko won only six of his 14 first-half faceoffs and Moore took his place in the second half and won four out of seven. Junior goalie Ethan Kamholtz made 10 saves.

Liberty has a week to prepare for its second road trip, an even longer one over spring break, when it will play four games in Florida over a span of five days starting March 10 at Florida State University, also 4-0. The only other undefeated SELC DI team is Virginia Tech (1-0, 0-0 Northwest Region), which the Flames host April 18 in their regular-season finale.

Both Liberty (No. 26) and FSU (No. 27) are on the bubble in the MCLA DI Top-25 Poll, but McQuillan wouldn't be surprised if both move up when the next rankings are released on Tuesday.

"The Florida State game will be a battle of undefeated teams," McQuillan said. "They're similar to where we are, knocking on the door. Maybe, by the time we meet, it will be a top-25 matchup."

He has high expectations for the Flames, who debuted at No. 30 in the preseason poll, to rise up in the rankings as they did last season in DII, finishing No. 3 in the nation.

"Definitely, with this being our first year at Division I, we're hoping we build a strong enough résumé to qualify for the MCLA Tournament," McQuillan said. "The earlier we can get (into the top 25) the better."