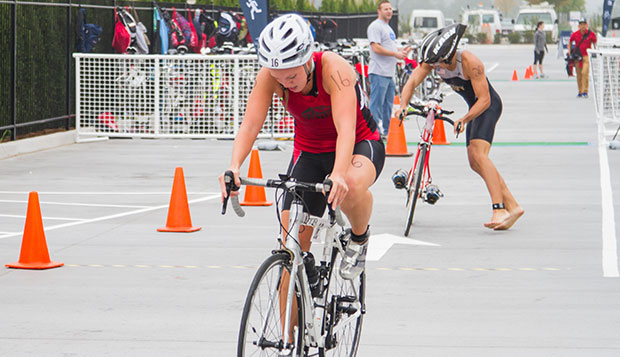 In the Ultra Division, which featured a 1,000-yard swim, 12-mile stationary cycling stage, and four-mile run on a treadmill, Lady Flames junior Hannah Baldino was her team's only representative and finished fourth in 1 hour, 11 minutes, 33 seconds. She was in second place after the swim, which she completed in 15:39, but had the slowest transition time out of the 10 participants from the pool to the bike, taking 3:06 to change. Baldino then was the third-fastest cyclist, finishing in 20:26, and had the third-fastest transition time from the bike to the run, requiring only 47 seconds. However, she ranked seventh on the treadmill with a time of 31:35, for a 7:54 mile pace.

The Sprint Division was exactly half the distance of the Ultra race, with a 500-yard swim, a six-mile cycling stage, and a two-mile run. Blake Williams, who graduated off of Liberty's team last year, was the overall winner out of 24 contestants in 30:20. He ranked fifth in the swim (7:02), first in the transition from the pool to the bike (1:02), 10th in the cycling stage (10:36) and first on the treadmill (10:49).

Liberty junior Jake Ingersoll placed third in 33:50, posting the third-fastest running time (6:54). Lady Flames junior Ashley Fouse was the fastest overall female in 34:00, in large part due to her first-place cycling time of 9:52 on the heels of her fourth-place time in the pool (6:46). Senior teammate Zoie Dobranski finished second among women and seventh overall in 35:34 on the strength of her fifth-place running time (14:03) as well as her transition phases, ranking fourth from the pool to the bike (1:23) and sixth from the bike to the run (0:42).

Senior William Daugherty was Liberty's fourth-fastest competitor and placed eighth overall in 36:07 after getting out to an excellent start in the pool, ranking third in 6:30. Fellow Flames senior Devane Lewis started out nearly two and a half minutes behind Daugherty after the swim (8:59) but nearly caught him with his seventh-place showing in cycling (10:27) and fourth-place finish in the run (6:54), taking ninth overall in 36:23.

The team has done mostly indoor training throughout the winter in preparation for the April 4-5 USA Triathlon Collegiate National Championships in Tempe, Ariz. That competition will include three championship races — a  750-meter swim, 20-kilometer cycling stage, and 5K run in the draft-legal sprint; the traditional 1,500-meter swim, 36K bike stage, and 10K run in the championship race; and a four-person mixed team relay, in which athletes will complete a 250-meter swim, a 5K cycling sprint, and a 1.2K run.