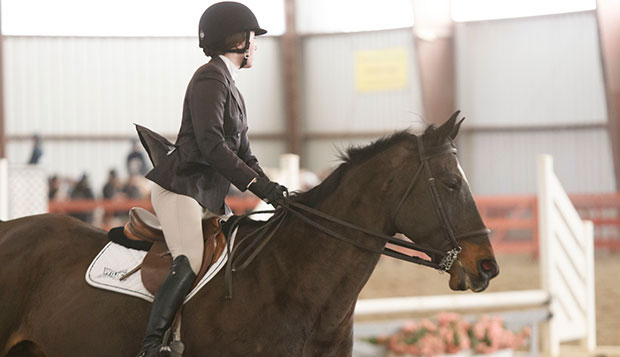 Riders for Liberty University's equestrian team had an extremely action-packed weekend, entering their final three shows of the season at Bridgewater College on Friday, Hollins University on Saturday, and the University of Virginia on Sunday.

Following the final three of five shows in a span of 16 days, the Lady Flames completed their first season since the program was reinstated last summer in 10th place in the final Region 2 standings.

"It was an absolutely awesome weekend," Liberty Head Coach Caroline Trexler said. "We had five girls entered in 10 classes at Bridgewater and all five girls placed in nine out of the 10 classes."

Chenelle wound up in a ride-off with four other equestrians in the novice, intermediate, and open divisions to determine the high-point rider of the day.

"She didn't end up winning, but it was really cool to have the opportunity to compete in the ride-off," Trexler said, noting riders duplicated their equitation on the flat class routine, showing their horse's walk, trot, and canter.

Bridgewater's Taylor Rose and a rider from Sweet Briar College were two of the highest point riders of the season for Region 2. Bridgewater, Sweet Briar, and Randolph College finished first through third, respectively, in the team standings.

At Hollins, Chenelle also placed second in intermediate on the flat.

Looking back on the season, Trexler said it exceeded her expectations.

"This is a huge rebuilding process for us and in my mind, this was an extraordinarily successful season," she said. "We established the program and hit the ground running and set the foundation for a very promising future."

Not only did the Lady Flames compete in every show on the schedule after auditing the initial event at Randolph, but they had at least one place-winner at all but UVa.

"Our goals for this season were just to survive and to learn how to make everything work, how to build a good rapport for the team," Trexler said. "We've been really blessed with excellent talent on this team and we were able to take that talent and to really cultivate it, to create a respectable team and build a level of respect, even though it's still a work in process."

With the competitive season complete for all but the teams that qualified for zonal and national shows, Trexler is looking forward to practicing with the team for the rest of the spring semester and returning to the ring for shows in September.

"I'm really, really excited for next year and it's only February," she said.