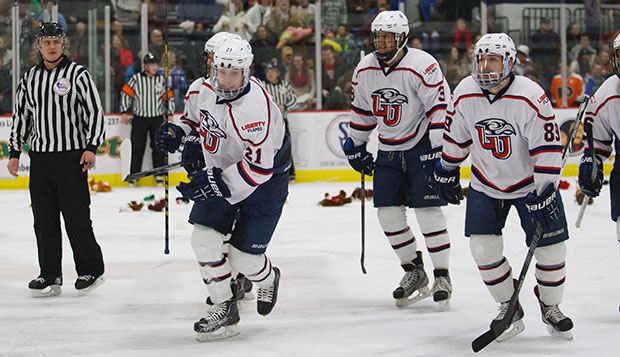 Liberty players celebrate a goal by sophomore forward DJ Dinnison (left) that set off the Teddy Bear Toss in a 3-2 overtime win over West Virginia, Feb. 15 at the LaHaye Ice Center.

For the first time in Liberty University Club Sports history, the Flames Hockey program will send three of its five teams to the American Collegiate Hockey Association (ACHA) National Championships.

Last Monday, during a Reveal Show webcast live from Liberty Flames Sports Network (LFSN) studios, Liberty's Division I men's team was announced as the No. 4 seed for the March 6-11 tournament at Fred Rust Arena in Newark, Del. As one of the top four teams, the Flames (29-6-2) receive a first-round bye and will face the winner of the game between No. 13 Naval Academy and No. 20 West Virginia University in their opener, March 7 at 11 a.m. The 20 qualifiers will play a total of 19 games in a single-elimination format to determine a national champion. The tournament bracket is available online.

Liberty's Division II men's team clinched its first ACHA DII National Championships bid since 2006 by winning two games in the Southeast Region tournament, which it hosted for the first time at the LaHaye Ice Center last weekend. The Flames defeated the University of Delaware, 4-1 on Saturday, and Miami (Ohio) University, 4-2 on Sunday, to secure a trip to the New England Sports Center in Marlborough, Mass., just outside of Boston.

They will play three games against Grand Valley State University, Northern Arizona, and New Hampshire on March 21-23 to try to advance to the Final Four, set for March 24-25.

The Lady Flames' Division I women's team became the third Liberty team to clinch a trip to nationals when rankings were released on Wednesday. Liberty made the eight-team National Championship field as the No. 7 seed and will travel to the same rink as the DI men's team in Newark, Del., to compete March 13-16. The Lady Flames will play three games in a round-robin format March 13-14 with the top four teams advancing to the March 15-16 Final Four.

This is the third year in a row that both Liberty's DI men's and women's programs have earned national berths, with the Lady Flames advancing to the championship game for the first time last year. It is the seventh time in the past eight seasons for the DI men's team — and the fourth time in the past five for the DI women — to make it to nationals.

The 2013-14 season has been a breakthrough year all-around for the Flames, with the DIII men advancing to the South Regional Tournament for the first time since it became Liberty's fourth hockey team in 2008.

"All of the teams have been very supportive of each other throughout the season," said Kirk Handy, head coach of the Flames' DI men's team and Liberty's senior director of Campus Recreation. "It was exciting to see all of the players and coaches from various teams out cheering our guys on at the DII regional tournament."

The three teams that have qualified are poised to make deep postseason runs.

"Everyone wants the opportunity to go to the national tournament and to succeed there, and all three are in a great position to do well," Handy said.