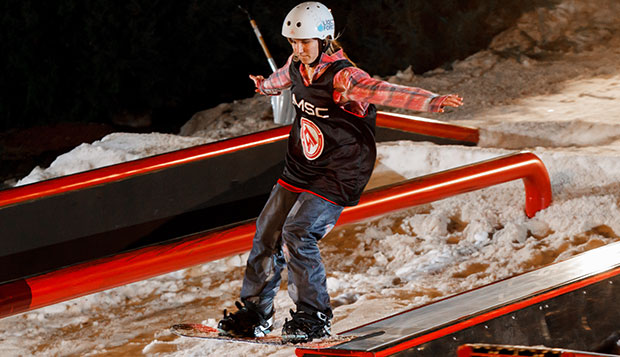 Twenty snowboarders and skiers put on a spectacular show for Liberty University's College For A Weekend crowd on hand for Saturday night's Rail Jam behind the LaHaye Ice Center.

"The judges took the top two tricks of each rider and Ben did a couple different things that put him on top," said Ryan Leeds, head coach of Liberty's ski and snowboard team. "He did a hardway backside 180 onto the rail and a Pretzel 180 off the rail."

Leeds said a Pretzel maneuver is when the rider stops their momentum after spinning onto the rail and then spins the opposite way.

"It makes the trick that much more difficult," he said. "That was probably the best trick of the night."

In the women's snowboarding competition, Liberty's Eden Jones, who placed fourth individually at last year's USCSA National Championships but has sat out her senior season with an shoulder injury, finished first out of seven contestants and five finalists.

"She wanted to compete but she had to duct tape her arm to her side so her shoulder wouldn't fall back out of place," Leeds said.

Beatty, who grew up wakeboarding and has set world records in that sport, took second place followed by Jordan Cummings, a Liberty student not on the team, who claimed third place.

Participants in Saturday's LaHaye Rail Jam are looking forward to the Snowflex Games in April, which will take the place of the Dew Games.

"That will be our biggest comp all year except for (USCSA) Nationals," Leeds said. "There's way more money, more marketing, and a lot more sponsors there, so contestants get a lot more recognition and notoriety."