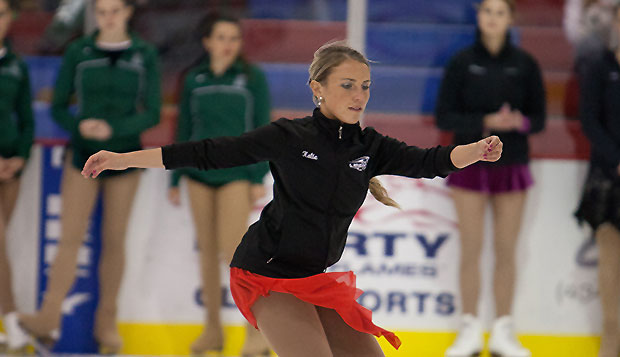 Just days after the Winter Olympics' closing ceremonies in Sochi, Russia, Liberty University will have the chance to revive some of the Olympic spirit by hosting its third United States Figure Skating Association (USFSA) Eastern Intercollegiate Competition, Saturday and Sunday at the LaHaye Ice Center.

"It is looking like this will be our largest competition yet," said Tatiana Payne, head coach of Liberty's figure skating team. "It definitely will be the most high-level skating you'll see here in Lynchburg. There will be guys and girls competing at the Junior and Senior level. So if you're interested in figure skating, this will be a good experience to come out and see."

The competition will feature two levels of solo dance, as well as short and long figure skating programs, and three levels of team maneuvers competition. Individual skaters can participate in as many as five events.

Unfortunately, the Lady Flames' only two Senior-level skaters, captain Kelly Pollock and Fantasia Remonvil, both seniors, have had to pull out due to injuries. Senior Brigitte Kovar will represent Liberty at the Novice level while sophomore Kelsey Rieschl will compete at the Intermediate level, junior Katie Scuilla and freshman Rebekah Leahy will enter in the Juvenile category, and sophomore Megan Mutchler and freshman Katie Proia will compete at the Pre-Juvenile level. Sophomore Emily Boyles and freshmen Maria DeFosse and Rebekah Hicks will compete in the preliminary free skate.

"We have some strong skaters I expect to place fairly well in their designated level of competition," Payne said.

The weekend event is considered one of three Intercollegiate Sectional Competitions for the Eastern Region, with teams earning points toward qualifying for the Aug. 14-16 USFSA Collegiate Championships at the Onyx Ice Arena in Rochester, Mich.