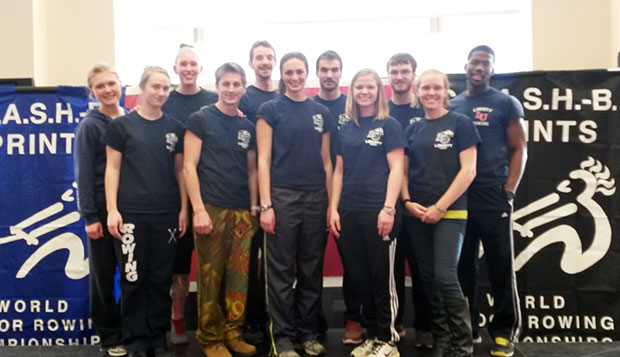 First-year coach Sarah Morris did take four men's and four women's rowers to the all-day event, with each competing in individual 2,000-meter races.

"It was a tough competition against a fast group of people, ranging in age from 12 to 97," Morris said. "They used an ice hockey arena and had 96 ergs on the floor competing at a time, with a big jumbo screen where you could watch everybody compete."

Liberty last rowed indoors at the Mid-Atlantic Erg Sprints on Feb. 1 in Alexandria.

"Everybody got at least a little bit faster from two weeks ago," Morris said. "We took two freshmen with only four weeks of experience at 2K who were rowing against people who may have been rowing competitively at that distance for eight years."

"It was very impressive," Morris said. "They didn't place, but some of them had really impressive results overall."

"For a woman, to be sub-eight minutes is a great achievement," Morris said, noting Martin had rowed a time of 7:54.3 at the Mid-Atlantic Erg Springs. "To take almost 20 seconds off is an incredible thing in a 2K over a span of two weeks. It was very impressive to watch. She's definitely the team's strongest woman this semester."

"That was another impressive score," Morris said of Lopp. "She's only been rowing 2Ks for a month and took 25 seconds off her time."

Sophomore Rachel Williams placed 38th out of 49 rowers in the lightweight race category in 8:19.6.

In the men's lightweight 2,000-meter competition, Liberty senior Mitchell Dieudonne came in 41st out of 77 rowers with a 6:49.7.

"That was the first time he's been sub-6:50," Morris said, noting anything under 7:00 is an exceptionally strong showing in men's races. "He was barely under it and he was excited about that."

"He's a freshman who started in the fall and he held his own on the floor," Morris said. "It was really good to see him get out there and earn his spot."

Liberty's crew team will hold a recruitment meeting for anyone interested in joining on Tuesday at 5 p.m. in the LaHaye Ice Center conference room.

The Flames will look to have their first outdoor practice of the semester in March in preparation for their first on-water race of the spring on March 29, the John Hunter Regatta in Gainesville, Ga.