Lady Flames to compete in three riding events this weekend 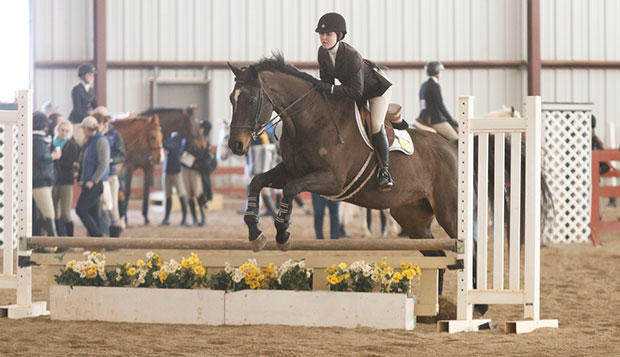 "We will be competing at Bridgewater on Friday, Hollins University on Saturday, and the University of Virginia on Sunday so we'll be doing the same number of shows as we did between October and February in one weekend," Lady Flames first-year Head Coach Caroline Trexler said.

She said the season is compacted with five shows in 16 days in February to leave time for regional, zone, and national competition by the end of the spring semester.

Liberty competed at its first two shows of the semester in indoor venues Feb. 7 at Randolph College and Feb. 9 at Sweet Briar College.

"We had a good show at Randolph," Trexler said.

"She has a pretty strong showing background and she did exceptionally well," Trexler said, noting her parents own a hunter-jumper barn. "She is comfortable enough to draw any horse and is used to getting in a ring on any number of horses, but she drew a really, really nice horse and rode really well. Riders definitely are the focal point, but if you have a horse that makes you look better, that goes a long way toward positively influencing the judges' scores."

The Lady Flames will bring their entire 17-rider team, but only expect to compete with five to seven in various categories at this weekend's shows at Bridgewater, Hollins, and UVa, which will host the Region 2 competition later Sunday afternoon.

Liberty is in its first season competing in one of the most challenging regions in the nation. The Lady Flames won't send any individual riders for regionals, needing 36 points to qualify, but Trexler hopes to have a solid all-around showing this weekend.

"Our goal is just to get through all three shows, have the girls perform smoothly and if we place, that's just icing on the cake," Trexler said. "It's been such a learning year. We've been working to bolster the reputation and standing of the team in the region and that will serve us well for next year.

"It takes such a long time to put together a riding program," she added. "You build the foundation of the program from day to day at the barn and by going to shows. We're working hard to make this a success. We're doing it the right way. We're excited to wrap up this year and end the season in a really good place and for the other schools to look back and say, ‘Hey, Liberty's doing a good job and we're excited to compete with them next year.'"