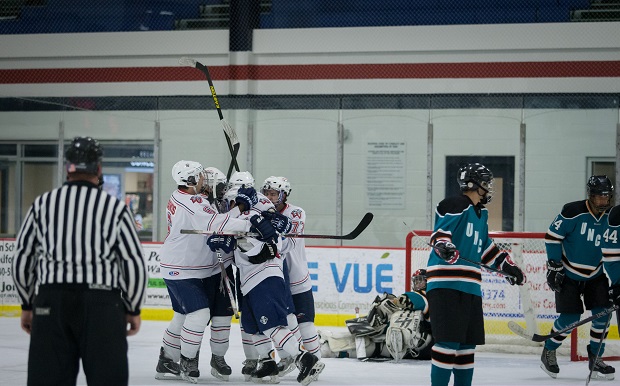 Liberty celebrates a goal Sept. 28 at the LaHaye Ice Center against UNC Wilmington, which moved up from the No. 11 to No. 6 seed for next weekend's ACHA DIII South Regionals.

For the first time in the four-year history of Liberty University's ACHA Division III men's hockey team, it has qualified for next Friday's and Saturday's ACHA DIII South Region tournament in Columbia, S.C.

Despite losing three of its last six games, the Flames (16-4), who were ranked No. 7 to start the second semester, didn't fall out of the top 10, barely making the cut for the eight-team tournament.

Liberty received 68 points in the final voting, edging out Charlotte (76) for the 10th and final spot in the playoffs. The Flames lost to Charlotte, 6-4, in last weekend's Blue Ridge Collegiate Hockey Association first-round match after rallying from a 4-0 first-period deficit to beat the 49ers 7-6 in overtime.

"We found out on Friday night, that we ended up squeaking into that No. 10 spot," Liberty third-year Head Coach Tristan Chambers said. "All three (DI, II, and III) teams are either going to nationals or regionals this year, so it's exciting to see things progress and grow and for teams to consistently take steps forward."

The final ACHA DIII regional rankings were released on Friday. In the South Region, No. 1 Florida Gulf Coast University and No. 2 Central Florida received the two automatic bids to the ACHA Division III National Championships, set for March 11-15 at Coral Springs, Fla.

Two more teams will qualify for nationals with two wins at the South Regionals at Plex Indoor Sports.

"We're going down there to hopefully upset two teams so we can go to nationals," Chambers said. "But that's a long way away. We've got some tough games ahead of us. Teams have done it before, but obviously, coming in as a 10, you're going to have to pull off an upset to win."

The Flames have a greater sense of urgency now, knowing their season could have been ended by its first-round loss in the BRCHA playoffs.

"The boys are excited and they're ready to go and leave it all out there," Chambers said. "We have quite a few seniors excited about getting another shot."

"We haven't played them, but I've heard good things about them," Chambers said. "They're a good team. Being ranked third, they got there for a reason, It's certainly going to be an uphill climb for us."

Other first-round matchups pit No. 6 UNC Wilmington against No. 7 Miami at 11 a.m.; No. 5 Florida against No. 8 Mississippi at 2 p.m.; and No. 4 South Carolina against No. 9 Christopher Newport University at 8 p.m.

"They have some strong goaltending, typical speed you see from a top-end team," Chambers said. "Were going to have to play a defensive-oriented game that minimizes their shots and creates opportunities for our forwards. We'll  use a lot of containment, blocking shots, eliminating quality scoring opportunities, and look to capitalize on the ones we get. Hopefully our goaltenders come up with big saves."