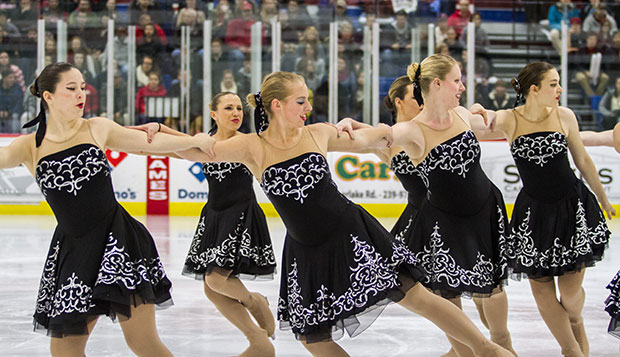 Liberty Radiance performs its program during the intermission of a men's hockey game at the LaHaye Ice Center on Nov. 8, 2013.

Performing its routine to the theme of "Phantom of the Opera," the 10-skater team came in fifth in the Collegiate Division, improving on last year's seventh-place showing. However, the team felt it skated well enough to earn a medal for a top-three finish out of the eight competing schools.

"The team did a phenomenal job," Liberty Head Coach Tatiana Payne said. "They had poise on the ice, they were all together, skated a clean program, and were able to portray the storyline of the Phantom of the Opera very well."

She said the program's choreography included individual skaters impersonating Pristine and Phantom, the two main characters from the Broadway production.

According to the combined scores from seven judges — three from Massachusetts, two from New York, one from New Jersey, and one from Virginia — the University of Maryland was the overall winner, followed by Princeton, New Hampshire, Boston College, and Liberty.

Half of each team's final rating was based on its technical merit and the other half on its presentation or artistic impression.

"When we watched (a replay of) our program, it clearly stood out," Payne said. "It looked more like a collegiate program because of the cohesiveness of the storyline, the power and speed behind the skating, and the extra elements we had."

Final scores, showing how the judges rated each team's routine, are available online.

Payne said of the top three teams, the only one correctly placed was Maryland.

"They skated cleanly," Payne said. "The rest of them were jumbled up and their placements didn't make sense."

Two of the judges Liberty Radiance received feedback from at the Nov. 10 Capitol Critique in Arlington, Va. — one from Virginia and one from Massachusetts — were on the judges panel and ranked Radiance's performance second and third overall, respectively.

Rather than protesting the final scores, the team has moved on and is looking forward to performing the routine one final time at the annual Praise Fest in April at the LaHaye Ice Center.

"We just decided to leave it and handle the placement with grace," Payne said.

Freshmen Rebekah Hicks, and Katherine Lash, and sophomores Emily Boyles and Megan Mutchler made the trip to Hershey and served as alternates.

Payne said the team enjoyed the thrill of competing in the Giant Center, which has 10,500 seats.

"It was a very old, huge rink and it was a lot of fun," she said. "It was a good location to host it. They all thought it was a good trip and experience."

Following its 12:15 p.m. performance, the team stayed to watch the U.S. Figure Skating Association Junior and Senior level competitions that followed as well as the Open Collegiate event. Next year, Payne anticipates competing at that level with the opportunity to advance to a national competition.