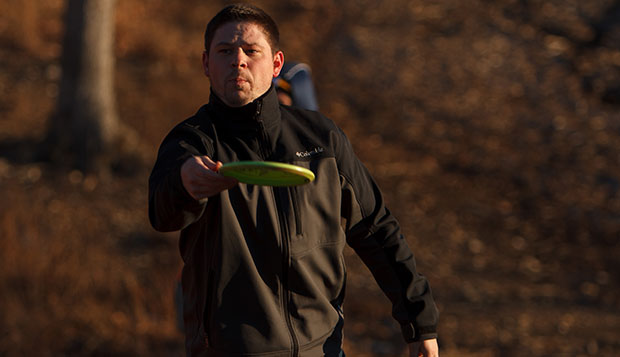 Liberty graduate student and assistant player coach Joses Merat placed ninth at the BRAWL X event at Rocky Mount, Va., and fifth at the one in Charlottesville.

The Flames and Lady Flames competed at two Blue Ridge Area Winter League (BRAWL) X events and had some of the top scorers in the open, ladies, and amateur standings.

"The team is playing very well," Liberty Head Coach Steve Bowman said. "These tournaments are great to get them ready for the bulk of our season — the Flamethrower (March 8-9 on Liberty's Disc Golf Course) and the National Collegiate Disc Golf Championships (in early April in North Augusta, S.C.)"

At the Jan. 18 Sontag Disc Golf Course in Rocky Mount, Va., the third of eight BRAWL X events, Joses Merat finished tied for ninth in the open division with scores of 69 and 63 for a 132 total. His wife, Mary, placed first among ladies just three strokes back (69-66-135).

The Flames traveled to Walnut Creek Disc Golf Course near Charlottesville for the Jan. 25 event No. 4. Liberty seniors Luke Laubscher and Jared Lebo tied for seventh in the amateur standings with identical 55-65-119 totals.

Complete results and standings through four events are posted online.

Liberty will next travel to BRAWL X events No. 5 at Big Branch in Bedford this Saturday and No. 6 at Elk Creek in Appomattox on Feb. 15.

"We like these environments where they have tournament pressure, good competition, and get a feel for the pace of the rounds to prep us for the months to come," Bowman said. "Even though we haven't had big signature wins, it has showed us who is focused and ready to compete."