LaHaye spotlighted as one of ACHA's toughest venues 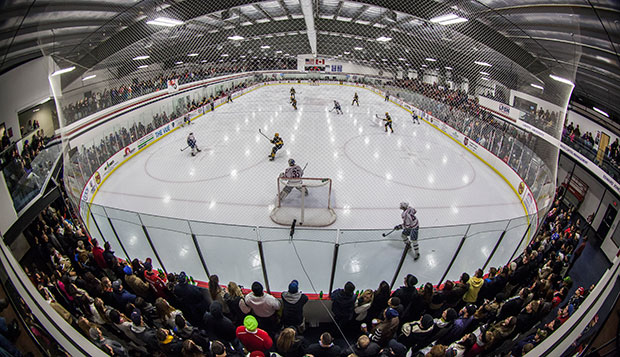 A view from the second deck of the front end of the LaHaye Ice Center during the No. 3 Flames' recent series against top-ranked Arizona State, played before a crowd of 2,293 fans.

In a first-hand account appearing on the achahockey.org website, Flames Hockey sports broadcaster Rett McGibbon and Club Sports video and media coordinator Patrick Strawn shared their impressions of what it is like for opposing ACHA Division I men's hockey teams to play in the high-energy environment generated by Liberty University fans at the LaHaye Ice Center.

The rink, the only one in the nation to host five ACHA teams from the same program (DI, II, and III men and DI and II women), is featured in the latest of a series of stories entitled "ACHA's Toughest Barns." Since opening in 2006, the Flames' DI men's team has gone 131-42 at LaHaye, helping it qualify for six of the past seven national tournaments and finish the season ranked in the top 20 each year and in the top 10 five times.

Liberty (24-6-2) is currently ranked No. 3 heading into this Friday and Saturday nights' games against Oakland, a team it met in the 2006 ACHA DII national championship game. The puck drops at 7 p.m. for both contests at LaHaye before the Flames conclude their regular season with home games Feb. 14-15 against West Virginia and Feb. 21 against the Richmond Generals Junior "A" team.