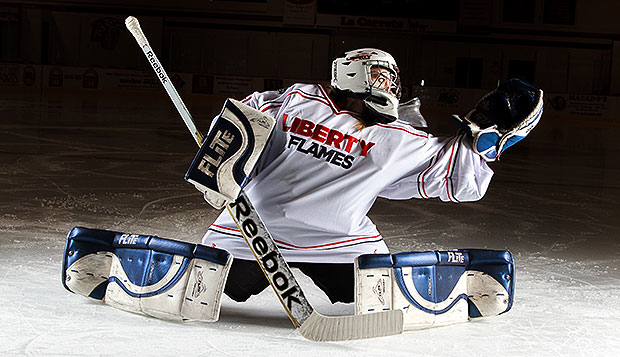 Liberty University's ACHA Division II women's hockey team played its most competitive game of the season, Saturday night against the University of Virginia at the Main Street Arena in Charlottesville.

For the first time this season, the Lady Flames advanced to overtime before falling by a 4-3 final. In its first 10 games, Liberty had been outscored scored 48-6.

However, Liberty allowed the Cavaliers to take advantage of two of their four power-play opportunities to tally the game-tying and game-winning goals.

UVa junior forward Adria Penatzer scored the equalizer off assists from junior forward Jennifer Morgan and freshman defenseman Erin Lyons with 12:31 left in the second period before Morgan netted the game-winner off an assist from Carly Buckholtz with 3:50 to go in the five-minute sudden-death overtime period.

"It was a close, back-and-forth game, but penalties hurt us in the end and we just were not able to capitalize on some of our opportunities," Liberty Head Coach Sara Niemi said. "We started off strong with two quick goals and we walked away from the first period up 2-1. We ran into trouble once we got our first penalty of the game in the second period which resulted in a goal, tying the game at 2-2."

Trailing 3-2 after UVa's Alexandra Griswold scored off an assist from Buckholtz midway through the second period, the Lady Flames responded to tie the contest in the third when freshman forward Alyssa Davis put away a pass from senior defenseman Rena Leone with 8:28 remaining in regulation.

"Entering the third, we continued to put pressure on their defense but missed a few open nets and were not able to battle hard enough in front of their net for a goal," Niemi said. "With 15 seconds left in the third, we got our fourth penalty and entered into overtime a player short, creating a four-on-three opportunity for UVa, which was able to capitalize."

The Lady Flames will conclude their season with a three-game trip to play the University of Maryland on Friday at 9:10 p.m. and the University of Delaware at the Fred Rust Arena, site of the ACHA DI men's and women's national tournaments, Saturday and Sunday at 3:15 p.m.

"The team will continue to work on our positioning and offensive pressure this week in practice and we are gunning for a win this weekend," Sara Niemi said, noting both teams are ACHA opponents while Maryland is also in the DVCHC.