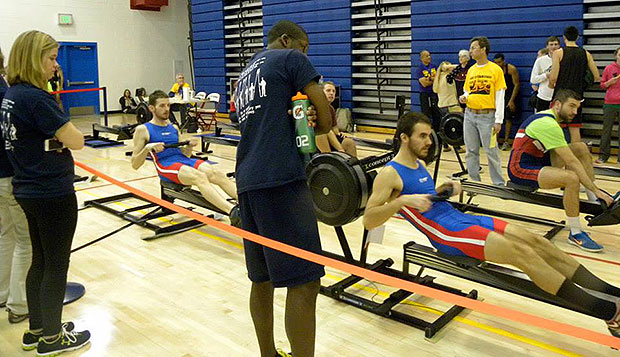 The Flames' rowers returned to Lynchburg with exactly 13 medals from the indoor competition, the largest satellite event for the Feb. 14 C.R.A.S.H.-B. Sprints World Indoor Rowing Championship, set for Feb. 14 in Boston.

"It was really exciting start to our (spring) season," Liberty first-year Head Coach Sarah Morris said. "Almost everybody medaled. It was a good way to measure up and see where we need to be at for the C.R.A.S.H.-B.'s, which is our last indoor event before we hit the water in March."

Morris said the team trains through the winter months on ergometer machines at Liberty, simulating rowing on the water.

"It definitely is a different dynamic," she said of rowing mates not being in the same boat. "In winter training, the team uses each other as competitors. They realize pushing each other will make us faster when we get on the water and have to row as a team."

Saturday's competition gave her a unique opportunity to analyze her rowers' techniques from up close.

"We all got to watch each other and support each other and see all that's involved (in a race)," Morris said. "They're only a few feet from me, so it's a good time for me to learn about their rowing. I can see how their stroke goes, how their power throughout the race is, and assess their general fitness and stroke level."

She will take her observations into account when configuring the lineups for her boats this spring.

The Flames won the majority of their medals in the team events with seniors Mitchell Dieudonne and Robert Newman, sophomore Joel Buckhalt, and freshman Kevin Brown winning the Men's Five-Minute Quad Slide, rowing 5,637 meters in the allotted time.

"The goal in that one was to see how in-sync they can row to accomplish the most meters in five minutes," Morris said.

Liberty also placed first and second in the Women's Three-Minute Crash (Double Slide) event, with freshmen Kathleen Lopp and Debbie Martin taking first by covering 1,572 meters and juniors Kylie Peterson and Haley Halstead second with 1,526. The Flames' tandem of Buckhalt and Newman came in second in the men's race, rowing 1,786 meters in the three-minute span, behind only George Mason's team which reached 1,860 meters.

Individually, Liberty was equally impressive, led by Dieudonne and Newman, who placed third in 6:57.0 and fourth in 7:03.5, respectively in the Lightweight Men's 2,000-meter sprint.

"That was a highlight," Morris said. "Mitchell did really well. The Collegiate Lightweight Men's 2,000-meter race is the most prestigious event of the day," with that distance being the university standard regatta length.

In the Women's 30-Minute Row, Martin placed first with a distance of 7,160. Liberty sophomore Rachel Williams also finished fourth in the Lightweight Women's 2000-meter event in 8:19.7.