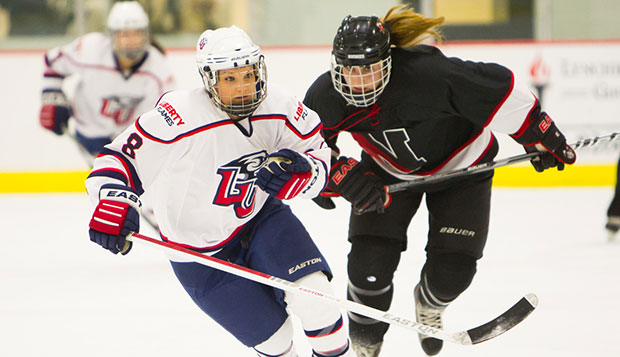 Liberty junior forward Jenny MacArthur tries to beat a Northeastern player to the puck. She had a goal and two assists in the No. 7 Lady Flames' 10-1 triumph over the No. 10 Huskies, Sunday morning at the LaHaye Ice Center.

The morning after shutting out visiting Northeastern, Saturday night at the LaHaye Ice Center, the onslaught continued for Liberty University's ACHA Division I women's hockey team, which made a case for a top-five national ranking with a 10-1 rout in Sunday's rematch.

The No. 7 Lady Flames (12-8-4), who swapped places with the No. 10 Huskies (11-9-1) in Wednesday's third of four ACHA DI rankings, scored three times in the opening period and added three more goals in the first seven and a half minutes of the second to take complete control.

"It's hard for girls to mentally prepare and get up for a game like this because you know they won 9-0 the night before," Liberty Assistant Coach Justin Forth said. "They went hard to the net and that's what we preach to them. If we want to win games against the top-ranked teams, we've got to go hard to the net and don't quit until the whistle blows. They did that."

Freshman forward Courtney Gilmour started the scoring with a shot from the perimeter off an assist from junior defenseman Autumn Kucharczyk that snuck past Northeastern goalie Kim Pfeifle. Freshman forward Marissa Graham, Liberty's second-leading scorer on the season, netted back-to-back goals from deep in the crease over the next three minutes. Graham, who started the season as a defenseman, scored from just outside the goalie box, with a chip shot near the left post, before finishing a backhanded follow into an open net off assists from junior forwards Jenny MacArthur and Sarah Stevenson for a 3-0 lead with 8:48 left in the first period.

"It was good for Marissa because she came in here on defense and we just felt she could add more to her game by playing up at forward," Lady Flames Head Coach Paul Bloomfield said. "It gives her an opportunity to spread her wings. The game's coming to her now, so that's good. You don't go from defense to forward without kind of a learning curve and she's done that. She works hard."

"She's a good utility player," Forth added. "She can play forward and defense and those are good to have. We have a couple of those."

Sophomore forward Carrie Jickling, the Lady Flames' top scorer on the season, ignited the attack 40 seconds into the second period by finishing feeds from Graham and junior forward Stephanie St. Amand from the right crease.

With Liberty on a five-on-three power play, defenseman Courtney Fischer, one of three seniors on the team along with forwards Laura Del Monte and Nikki McCombe, extended the lead to 5-0 on a fast break before MacArthur scored from the left circle on a shot that slipped through Pfeifle's pads. Stephenson capped the second-period scoring with blast from the top of the right circle assisted by MacArthur and Kucharczyk.

The Huskies ended Lady Flames junior goalie Chantal Lischynski's bid for a shutout with 1:14 left in the second period on a power play goal by sophomore defenseman Mackenzie Boedicker, who deflected in a long-range shot by senior forward Nicole Fox.

Liberty added three goals in the third period to reach double digits in scoring for the fourth time this season. After junior defenseman Madison Fischer was sent to the penalty box, Jickling scored a shorthanded goal with a backhand shot on a breakaway that beat Pfeifle inside the left post. Graham then completed her hat trick on a three-on-one break by lifting a left-handed wrist shot from the left circle into the upper right netting for a 9-1 advantage before Gilmour finished what she started by putting away a feed from McCombe from short range for the final score.

"It was a good cycle and just good hard work down low," Forth said. "(McCombe) put it out front and (Gilmour) was able to finish, to put a nice cap on the scoring."

Liberty outshot Northeastern 36-13 for the game.

After being ranked No. 10 in the first two ACHA DI polls, Bloomfield would like the Lady Flames to be seeded fourth or fifth in the eight-team national tournament, March 13-16 in Newark, Del.

"We've got to do it ourselves," Forth added. "We don't want to have to rely on other teams to help us out throughout the league. We've just got to focus on our games and get the job done."

Liberty will welcome No. 14 Davenport, a first-year program which the Lady Flames defeated 5-0 Jan. 10 in Michigan, next Friday at 10 p.m. and Saturday at 3 p.m. at LaHaye.