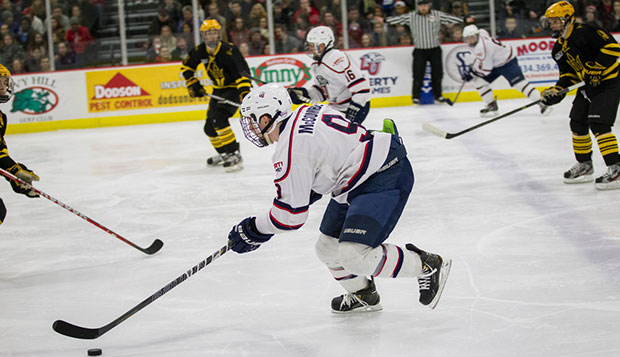 Penalties took their toll on Liberty University's ACHA Division I men's hockey team in Saturday night's rematch with No. 1-ranked Arizona State University, a 6-2 setback at the LaHaye Ice Center.

The Flames (23-6-1), ranked third in ACHA DI, were only outshot 30-25 on the night, but were sent to the penalty box 11 times leading to three power-play goals by the Sun Devils (28-1). ASU swept the teams' three meetings in nine days and dealt Liberty its first back-to-back defeats of the season.

"Lesson learned tonight for us," Liberty Head Coach Kirk Handy said. "Team discipline's got to get to a championship level and when we take penalties and they score three power-play goals, it's a part of our game that has to improve if we want to go all the way. When you play against a team like Arizona State with the power play that they have, you have to stay out of the box."

A measure of a top-ranked team is its ability to retaliate quickly after giving up a goal. ASU, which has remained atop the rankings since mid-November, did that twice in the second period as the Flames tried to dig themselves out of a 3-0 hole at the end of the first.

Senior defenseman and assistant captain Jackson Kuhn finally put Liberty on the scoreboard with 11:22 left in the second stanza by deflecting in freshman Robert Ward's slapshot off a cross-ice assist from junior forward Ryley Egan.

But just 56 seconds later, Sun Devils senior forward Colin Hekle, stationed in the left circle, one-timed a perfectly placed assist across the crease from freshman forward Sean Murphy into the upper netting past Liberty freshman goalie Matt Pinel, pushing the cushion back to three goals at 4-1.

Senior forward and captain Andrew McCombe helped the Flames trim the deficit back to 4-2 at the 7:02 mark by skating around the back of the net and dishing a pass to freshman forward Brandon Mistal. He flicked the puck past ASU freshman goalie Robert Levin to Ward who stuck it in from point-blank range on the left side.

However, the Sun Devils would strike back before the end of the second, capitalizing on a second power-play opportunity in a span of five minutes when senior forward Brian McGinty rifled in an assist from Murphy from the top of the right circle.

"When it was five-on-five, I thought we were playing them evenly, but when we went down and were shorthanded, no way," Handy said. "They scored three power-play goals. It was the difference in the hockey game tonight. Moving forward, regardless of who we're playing, we've got to stay out of the box."

The Sun Devils dominated the first period, putting multiple shots on goal and scoring the game's first goal just three minutes into the action. Freshman forward Michael Cummings, lurking near the right post, snuck in an assist from fellow forward Dave Jantzie past Pinel for a quick 1-0 edge. ASU added two power-play goals, deflating the standing-room-only crowd of 2,293 fans and opening a 3-0 advantage by period's end. Both ASU scores were assisted by Murphy and sophomore forward Kale Dolinski, the ACHA's scoring leader who upped his season assist total to 41 with three on the night. Freshman forward Ryan Ostertag, who scored the game-winner in overtime in Tempe, Ariz., and the clincher on Friday night, netted the first power-play goal on a low shot through the five-hole from the right circle before McGinty finished a slapshot from the left circle into an open net off a crisp cross-crease pass from Dolinski.

Liberty's offense needed a wake-up call after Arizona State held it to two goals in an overtime loss at Tempe, Ariz., last Thursday and a 5-2 setback Friday night at the LaHaye. But the Flames didn't get it done early on.

Liberty started the second period on a power play and generated some quality scoring chances, but Levin, who entered the game with an ACHA DI-best 1.08 goals-against average, 0.957 save percentage, and five shutouts, was up to the challenge, stopping shots around the cage.

Handy is determined to have his players on the same page and fully prepared for their last road trip of the regular season, next Friday and Saturday nights at No. 7 Delaware's Fred Rust Arena in Newark, Del., site of the March 6-12 ACHA DI National Championships .