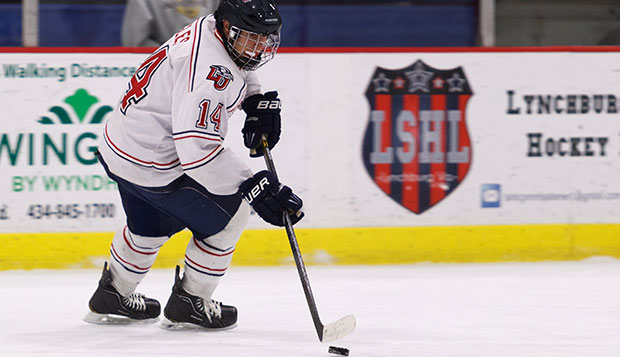 Flames sophomore forward Paul Ingles controls the puck along the boards at the LaHaye Ice Center.

Rallying from a 3-1 third-period deficit, Liberty University's ACHA Division II men's hockey team capped its comeback against Mid-Atlantic Collegiate Hockey Association (MACHA) South Division rival Delaware with a game-winning goal from one of the least likely sources in the most dramatic fashion, Friday night at the LaHaye Ice Center.

A chip shot off the stick of freshman defenseman Daniel Huntington from deep in the crease around the Blue Hens' pen crossed the plane of the goal a split second before the third-period buzzer sounded, lifting the Flames to a 4-3 victory.

"That was a flair for the dramatic, coming in the last less than a second," Huntington said of his third goal of the season, assisted by freshman forward Jordan Barstead and senior forward Bob Cervone. "I get a (few offensive chances) on the power play, but getting down low in front of the crease is not something that I'm so much used to as a defenseman. It was kind of a ‘right time at the right place' kind of thing and a good set-up from my teammates."

Liberty Head Coach Chris Lowes was glad to see his team's determination and focus in the third period. The Flames (23-6, ranked fifth in the latest Southeast Region poll) had shut out the Blue Hens (15-10, ranked 10th), 4-0 on Nov. 10.

"That, as much as anything to me is the positive from tonight," Lowes said. "Every team feels good and gets comfortable when they're ahead, but playing from behind takes a certain mindset and I was very happy to see that go on tonight."

Senior forward Brad Docksteader, the MACHA player of the month in November, fueled the Flames' rally by finishing a feed from junior defenseman Clinton Nigh with 9:22 left in the third. Less than three minutes later, freshman forward Ben Freymond netted the equalizer off assists from sophomore forward Jeff Boschman and Ryan Francis, setting the stage for Huntington's final score.

"I told them at the end there, a lot of guys are pretty excited and it's a good bounce, but it's a pretty heads-up play there by Daniel, stepping down in the crease, realizing there's only a couple seconds left and being aggressive," Lowes said. "Our other guys down low did a good job of showing some urgency and trying to get a puck to the crease."

Liberty's win, combined with Virginia Tech's loss to the University of Maryland Baltimore County, puts the Flames (5-1 in the MACHA South) into a tie for first place in the MACHA's South Division entering Saturday's game against UMBC (16-6-1, ranked fourth in the Southeast), set for 9:45 p.m. at LaHaye.