Lady Flames fall short in first game against No. 1 Miami 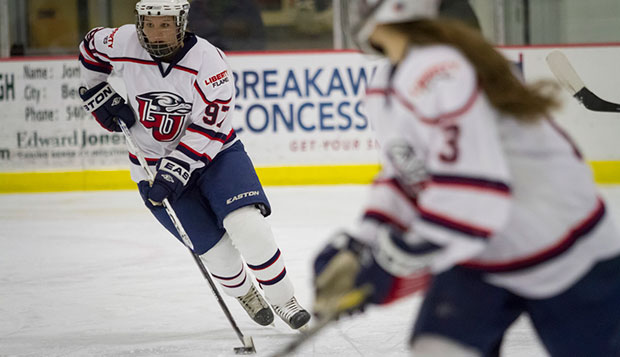 Liberty sophomore defenseman Sarah Fowler starts a transition beside sophomore forward Carrie Jickling in the Lady Flames' 4-2 loss to No. 1 Miami of Ohio, Thursday at the LaHaye Ice Center.

A late flurry of shots on goal came too late for Liberty University's ACHA Division I women's hockey team to mount a serious rally in its first meeting with Miami (Ohio) University, the No. 1-ranked team in the nation, Thursday night at the LaHaye Ice Center.

Defensive breakdowns by the Lady Flames and offensive breakaways by the Redhawks were a fatal combination for 10th-ranked Liberty, which slipped to 9-8-4 with a 4-2 setback, its first in five meetings with Miami (18-1-2). The Redhawks remained undefeated at 10-0-1 on the road with their 11th consecutive victory, including a 4-1 win at defending ACHA Division I national champion Minnesota on Nov. 16.

Miami freshman forward Rachael Booth, the leading scorer in ACHA DI, netted the game's first goal off an assist from sophomore defenseman Katie Lincoln with 3:15 remaining in the first period. Booth later put the Redhawks up 3-1 by pouncing on a loose puck left in the defensive zone during a hasty Liberty line change and won a short one-on-one with Lady Flames junior goalie Chantal Lischynski with a quick move and tidy finish inside the right post.

"That was a terrible line change," Liberty Head Coach Paul Bloomfield said. "It was just a mistake. It's just so hard when you work so hard and you make a mistake like that and it costs you. You just can't make those kind of mistakes against these good teams."

Just one minute into the second period, Liberty junior defenseman Madi Fischer had scored the equalizer, putting away a loose puck along the goal line on a rebound of a shot from the right wing by junior forward Amanda Grainger.

However, the Redhawks went on a power play two minutes later after Lady Flames freshman defenseman Marissa Graham was called for tripping when her stick got caught in a Miami player's skate. Redhawks sophomore defenseman Morgan McGrath capitalized with the go-ahead goal seconds later on a shot from beyond the top of the left circle that snuck past Lischynski inside the left post.

Eight minutes into the third period, Miami freshman left wing Kaley Mooney deked Lischynski before finishing a breakaway opportunity around her left pad for a 4-1 cushion that all but put the win on ice for the Redhawks.

Liberty freshman forward Courney Gilmour converted an empty-net goal off a sweeping crossing pass from Grainger that caught Miami goalie Dana Lovin out of position with 5:13 to play. The Lady Flames increased their pressure for the rest of the game, but were unable to pull any closer.

"We didn't play 60 minutes of hockey, and against good teams, you've got to play it," Lady Flames Head Coach Bloomfield said. "It was frustrating. We had times that we controlled the game and actually outplayed them, but just didn't stay consistent and steady enough."

The Redhawks have now outscored opponents 124-26 on the season, led by a trio of goalies who have allowed fewer than two goals per game.

"Their goaltender's really good," Bloomfield said. "We had opportunities, too, but we just didn't capitalize."

Liberty will get a second shot at Miami on Friday at 3 p.m. in the LaHaye Center, with the game webcast live through the Liberty Flames Sports Network.

"We're stopping them tomorrow night," Bloomfield said, noting junior forward and leading scorer Sarah Stevenson will in the lineup after missing Thursday's game with a back injury. "We'll clean up our act."