No. 3 Liberty returns home for rematch with No. 1 Sun Devils 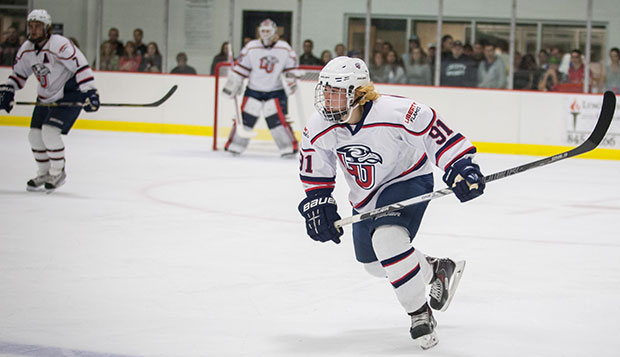 Liberty University's ACHA Division I men's hockey team has played top-ranked Arizona State University three times in Tempe, Ariz., losing twice by shootout in 2012 and 2013 and once in overtime last Thursday night. This week, the Flames get their first shots at the Sun Devils in their home rink, Friday and Saturday at 7 p.m. at the LaHaye Ice Center.

"It is another opportunity to take a step forward with our program, to kind of gauge how our season's going and where and how we're progressing," Liberty Head Coach Kirk Handy said. "Both teams will be ready to go and continue on the game that went into extra time last week."

The Flames first met ASU in the second round of the 2010 ACHA National Tournament in Chicago, another extremely tight contest.

"We're going to prepare ourselves to do everything we can to be the best we can be on Friday night," Handy said. "We'll worry about our guys, how they're preparing and how they're executing this weekend."

Playing the No. 1 team in the nation is not as daunting a task for Liberty as it might be for other teams. Besides taking the Sun Devils to a shootout last year and overtime last week, the Flames upset top-ranked Penn State in 2011 and Ohio in 2012 at LaHaye.

"We're just focused on improving every time we're out there and becoming a better team," Handy said. "Our key and our focus is on our group of guys and making sure we're ready to go. We have to come in and play well here for two games, doing the things that are going to make us a better team."

For the third time in the past five ACHA Division I rankings, the Flames bumped back up to No. 3 behind the top-ranked Sun Devils and No. 2 Robert Morris-Illinois.

"Both teams have the ability with all four lines to be very productive," Handy said. "They don't just rely on a couple players to score goals. It's a team game and both teams have confidence in all the guys that are out there."

Arizona State scouting report: The Sun Devils have maintained their top position in the ACHA DI rankings since overtaking defending national champion Minot State on Oct. 24. They had their program-record 23-game winning streak stopped by No. 5 Oklahoma on Jan. 10.

The Sun Devils are even more impressive on defense, especially in the cage where Levin is backed up by senior Joseph D'Elia, who has gone 11-0 with a 1.45 GAA and 0.93 SP.

All-time Series: Liberty is 0-1-3 against ASU, losing shootouts to the Sun Devils the past two seasons before falling 3-2 in overtime last Thursday in Tempe, Ariz.

Coaches: Kirk Handy, in his 14th season as Flames head coach, has a career record of 302-126-13. Greg Powers, in his fifth season at Arizona State, boasts a 139-26-7 mark after leading the Sun Devils to their first No. 1 national ranking and ACHA DI Final Four appearance last season.