Lady Flames host No. 1 Redhawks on Thursday and Friday 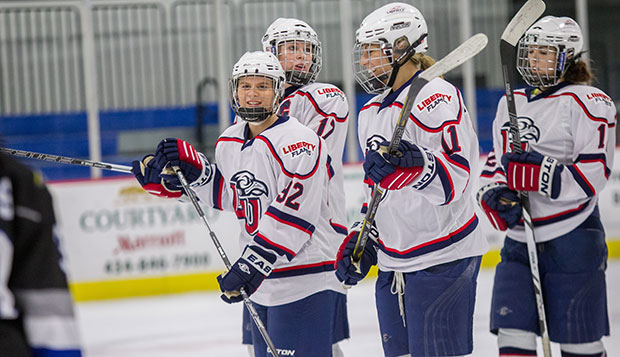 Freshman forward Courtney Gilmour (92) and the Lady Flames hope to keep their winning streak alive against the Redhawks, an up-and-coming program ranked No. 1 in ACHA Division I.

Before Liberty University's ACHA Division I men's hockey team entertains Arizona State University, the No. 1-ranked team in the nation, Friday and Saturday at the LaHaye Ice Center, the Lady Flames' Division I team will have the opportunity to host the top-ranked team in the ACHA DI women's poll this Thursday and Friday when Miami (Ohio) University visits LaHaye.

But the Lady Flames, who reached last season's ACHA DI national championship game, have been ranked No. 10 in the season's first two polls, mainly because they are 5-1-1 against non-ACHA opponents and 4-6-3 against ACHA DI foes.

In order to make a return trip to the ACHA National Tournament, which invites the top eight-ranked teams, Liberty needs to post wins over teams like Miami, which received all 18 first-place votes in the latest poll, and No. 7 Northeastern University, which it went 0-1-1 against Nov. 2-3 in Boston, next Friday and Saturday at LaHaye.

"We haven't done as well as we could have done in key games," Lady Flames Head Coach Paul Bloomfield said. "If we don't do well this weekend, it's not looking good for our national tournament chances. I'm glad to play (Miami). We need to do well."

Bloomfield is confident Liberty can at least hold its own against Miami, especially with the return of senior defenseman and team captain Courtney Fischer and sophomore forward Catharine Burrell, who will be playing in her first games since tearing ligaments in her knee in a sweep of Miami last January in Oxford, Ohio.

"We should have everybody ready to rock and roll this weekend," he said. "I'm looking forward to having everybody in skates."

The Redhawks, who are only in their fourth year with a program, are young, with 10 freshmen and seven sophomores, and only two juniors and two seniors on their roster. They have outscored opponents 120-24 on the season and have six players with 20 points or more, including freshman Rachael Booth, who has 26 goals, — including nine game-winners — and 12 assists.

"They're still in the building process, but they're a decent team, from a good, strong hockey-oriented school," Bloomfield said. "They've got a lot of wins under their belt but they're beatable. I don't think they're that much of a powerhouse. I'm not afraid of them, but at the same time, it's not going to be a walk in the park."